"Saint Steven" - Saint Steven (1969)
Saint Steven's self-titled debut is a mixture of hard psych rock and softer folk-psych trippage.  Sound effects, animal noises, and snippets from a political convention all permeate.  It all sounds like it might be a fustercluck, but it somehow works.  The album appears to be a concept of some kind, and it may be.  It doesn't really matter.  The spin is a cool journey of mysteries and psych delights.  The album has plenty of replay value and is unlike anything I can compare it to.  This is not a 5-star square.  This is not Morgen, which shares the same label.  But Saint Steven is not just flipping fries here, either.  The listen is time well-spent.
There is surprisingly little known about Saint Steven.  We know that Saint Steven is guitarist and singer/songwriter Steve Cataldo who later went on to form one of Boston's first punk/new wave bands...Nervous Eaters.  If more details are up there in the cloud pool, I'll have to leave the high-diving for you.  (On a side note: You can follow the Nervous Eaters on Face.) 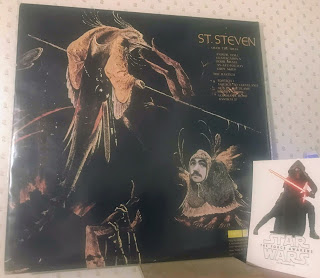 "Saint Steven" (back)
Favorites include..."Bastich I"...an atmospheric gloom that slides into some frantic guitar psych crankage.  The Doors-like float-adelic "Bright Lights" and the psych-pop guitar-driven "Gladacadova" are both tasty.
I had the Saint Steven album on my watchlist for several months before pulling the trigger way back in February.  I was looking for a vg+ copy or better that was kissing $30 or at least rubbing shoulders near that number.  I finally snagged one for $34 shipped on a Make An Offer eBay transaction.  Still a lot of money for my billfold.  I seldom find goodies like this in the wild.  The front cover artwork on this gatefold looks like...hope.  The back cover...despair.  The inside cover is a crossroads.  My interpretation, anyway.  YMMV.  Take one down and pass it around.  A cool psych album to add to the collection. 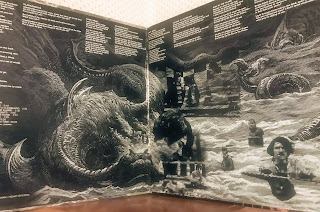 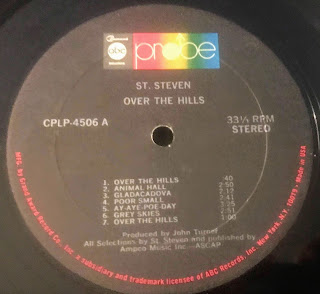