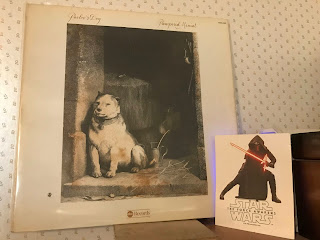 "Pampered Menial" / Pavlov's Dog (1975)
(prog rock)
Pavlov's Dog was a prog band out of St. Louis, Missouri and their debut album "Pampered Menial" is a prog album, I suppose.  But there's an AOR presence here, as well.  It's tough to label.  Prog is such a slippery matza ball anyway.  It's like ordering eggs for breakfast.  There's a lot of different ways to have them served.  Everyone has their own...specifics.  Me, I generally gravitate toward prog with a more psych-dusted...trippier edge and closer to the late 60s.  Closer to the egg, if you will.  Still, "Pampered Menial" is pretty good for what it is.  It definitely has a unique sound.  I'm gonna have to spin it a few more times to see if this becomes a grower before deciding to pass it forward.
The lead singer, David Surkamp, has an obvious "Geddy Lee" bend, but with a more feminine timbre.  Hate it or love it...it's amazing.  There are gentle piano, flute, and violin shoulder taps going on to balance out the harder rocking moments.  Together, Pavlov's Dog brings to mind Rush, but with an early Supertramp / Marty Balin ramble.  And now I'm rambling.  What do I know?  I don't know anything. 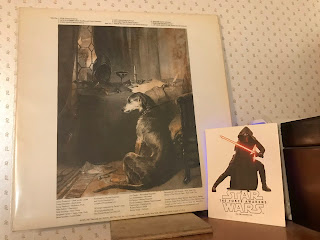 "Pampered Menial" - Pavlov's Dog (back)
Favorites include..."Fast Gun."  The ballad..."Julia" is a gentle album opener and was the song I first heard while listening to Sirius "Deep Tracks" radio.  I enjoyed it then, and still do.  And "Of Once and Future Kings"...the longest track at 5:30 minutes is the digital burner for sure and certainly the most epic.
My copy had a $6 price tag and was clean as clean!  The sound just jumps from the speakers.  The album cover has a bb hole in the bottom left, but that's something that's never bothered me.  However, with the white frame border, the hole is more noticeable than I like.  Whaddygonnado? 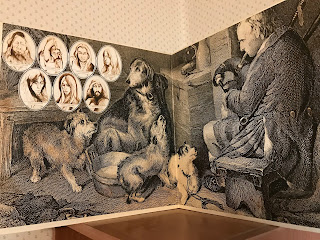 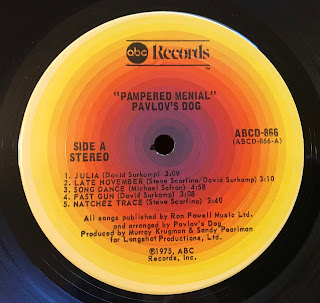