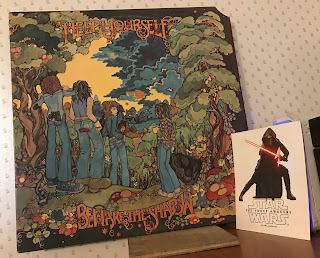 "Beware The Shadow" - Help Yourself (1972)
I try to avoid band comparisons in my descriptions for fear I might taint your listening experience...but for a band hailing from the streets of London...Help Yourself...has an amazing grasp of the California hippie wonderwheel.
The album "Beware The Shadow" has a rural rock vibe that flirts occasionally with a bit of the psych dust.  Not heavy psych, but the scent is definitely in the air.  Songs are easy to warm to and
sometimes stretch into a nice heady jam.  To put your mind in the musical ballpark, imagine a mix of Quicksilver and the trippy period of New Riders and you'll find your way home from there.
"Beware The Shadow" was the band's 2nd or 3rd album depending on the source, but all received high marks.  I don't think their albums sold very well in the States, I rarely see any in the wild.  But Help Yourself...would be right at home at any West Coast jam session.  Of the two albums I've heard, I think I enjoyed their "Strange Affair" (1972) album a little bit more, but there's a lot to like here, as well. 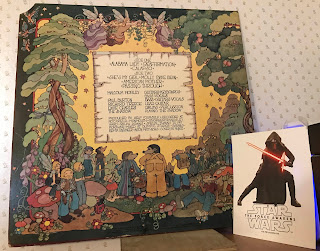 "Beware The Shadow" - Help Yourself (back)
Favorites include the 12-min psych-dusted "Reaffirmation."  It's a heady number that builds into a sweet fuzz jam, ala Grateful Dead, but with less noodling.  It's the longest track on the album and the best.  "American Mother" is another tasty fuzz guitar gem and the vocals are just perfect.  One of those songs that gets better with every listen.  "Passing Through" is a warm and gentle Poco-esque ballad that closes the album.
There's also a song on here..."Molly Bake Bean"...that you'll either love or hate.  No middle-ground.  It's a bit of a hippie novelty track and sounds like something from Syd Barrett and the Hillbilly Pink Floyd Band...if there ever was one.  Definitely, an acquired taste.  I actually kinda dig the Syd Barrett attitude, but overall I think the album would have been better served without it.
My copy was rescued along with another Help Yourself album at a garage sale.  I'm glad I grabbed'em both because I haven't seen any of their albums since.  I bundled up with a few other albums and wound up paying about half of what they go for.  There is a corner-cut at the top-right.  The label reads 1972, the back cover reads 1973.  Enjoyable spin. 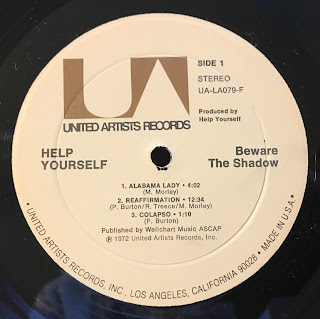 OMG! Somebody else is into Help Yourself. This is a great record that I wrote about several years ago on my blog. I just found an expensive anthology with several of their albums - including this one - on iTunes that I'm considering buying. You can read my post here. https://bloggerhythms.blogspot.com/2015/06/forgotten-music-help-yourself-beware.html