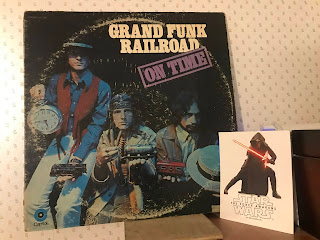 "On Time" - Grand Funk Railroad (1969)
I'm a fan of this little ol' band from Flint, Michigan and already have several of their albums, both studio and live, but for whatever reason...I could never find a nice playable copy of this out in the wild.  I knew I would eventually, so I held off until I found my own copy before having my first taste from Grand Funk Railroad's debut.  And now I finally own a very nice good playing copy.  I was not disappointed.
It's heavy hard blues rock with plenty of tasty wah-wahs and fuzz-burns and thumpin' bass runs and drum poundage to carry the cargo with very little trouble.  This is the classic Mark, Don, and Mel power-trio we've all come to know and love.  There are a few classic staples on this debut you will recognize, but it's the deeper track gems that really tinkle the chimes.  Just as heavy and fun a spin as I hoped it would be. 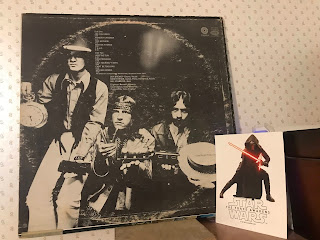 "On Time" - Grand Funk Railroad (back)
Favorites include..."Anybody's Answer."  "Are You Ready?"  "Heartbreaker."  And "High On A Horse”  All these scratch that Grand Funk itch.  And each one carries a sprinkling of psych dust that'll put a wee smile on your face.  There's just something about Grand Funk Railroad that brings a  joyous nostalgia to the ears that's easy to crank.
My copy has a ring-worn cover that I'm not a fan of, but a beautiful circle of vinyl lies within.  Much cleaner than the cover would suggest.  I grabbed it at an AOK Record Swap a couple of years ago for $3.00 and am just now getting 'round to cleaning it up and taking it out for a spin. This is where it all began for GFR, so if you like the early heavy hard rock stuff…"On Time" is one inexpensive head rocker.  Don't sleep.   Bonus:  I had a great conversation with 'foot-stompin' legend himself…Mark Farner…talking about the heavy, heady days.  Check it out here! 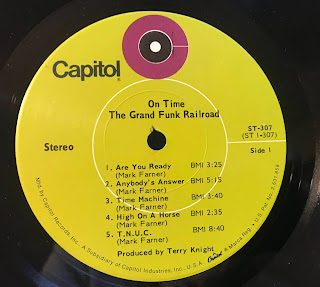