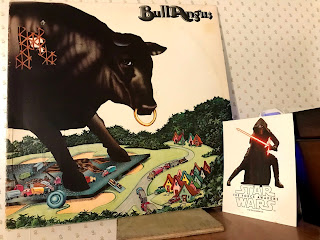 "Bull Angus" - Bull Angus (1971)
(Hard Rock, Prog & Pysch Rock Dust)
I quite enjoyed this fantastic sample of early 70s hard rock.  Bull Angus, out of Poughkeepsie, New York, recalls moments of Grand Funk and Deep Purple, but with a little less noodling and a little more variety thrown into the mix.  Bull Angus has very much their own sound.  I'm just trying to put your ears in the right ballpark.
With twin guitar leads and tasty Hammond organ, songs blaze and swirl easily.  And for 1971, this self-titled album has that hard rock energy and vibe that foretells nicely what was later to come.  There are also tasteful prog dustings here and there, but they only add heady punch to the cup without being a distraction.  Really, just good songwriting all around. 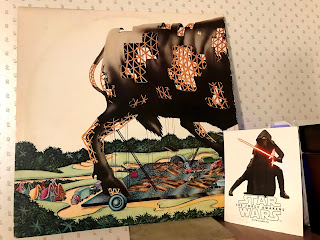 "Bull Angus" (back)
There are three nice tracks over 6-minutes long, but I especially enjoyed the closing track “No Cream For the Maid” and the last track on side one..."Miss Casey."  Other favorites include “Uncle Dugie's Fun Bus Ride” and "Pot Of Gold."  There is also a nice, dreamy acoustic gem..."Cy'"...that is definitely not cheap.  Each scratches the early lost classic rock sweet spot.
I found "Bull Angus" at an estate sale in Park City, KS.  Most albums were the easy top-40 variety you see everywhere, but I did see someone carrying around "L.A. Woman" with the yellow gimmick die-cut cover which I would have loved to have gotten to first.  Whaddayagonnado?  My copy was an original pressing with a $20 tag I was happy to pay.  They usually hover around $30-$40 online.  What a rush to find an obscure album like this.  I'd never seen one.  The band recorded one more album before closing up shop.  Neither creating much buzz.  Interestingly, the lead singer went on to form Franke and the Knockouts.   Curiouser still, he co-penned "The Time of My Life" and "Hungry Eyes" for the "Dirty Dancing" soundtrack. 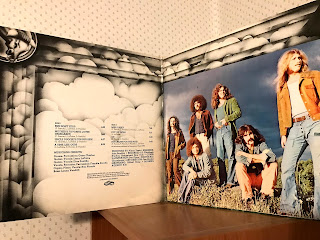 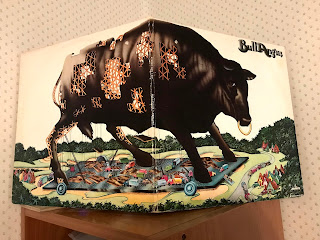 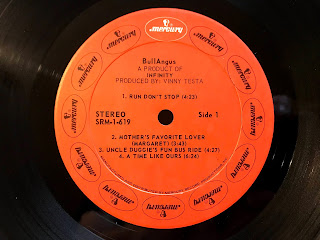