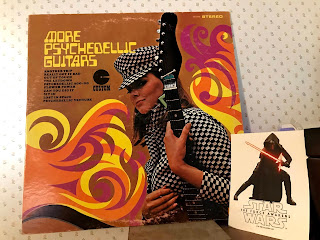 "More Psychedellic Guitars" - Jerry Cole (uncredited) (1967)
I dig the groovy cover.  That the word "psychedelic" is unintentionally misspelled three times on the front is even better.  This is one of many exploito or cash-in albums that were vying for hard-earned pocket jingle during the psychedelic craze that was starting to hit the market.  Albums of this ilk often contained lame and uninspired guitar instrumentals, and this one, sadly, is no exception.  Not exactly bad instrumentals.  Just ordinary.  But sometimes, if you're lucky, exploito albums can hold real tasty psych goodness.
Uncredited session guitarist Jerry Cole was usually responsible for both.  Jerry recorded a buttload of guitar instrumentals in the studio, much of it never meant to be released.  And cheapo record companies would grab a handful and throw them on an album and call it whatever they wanted.  They didn't care.  They just wanted records they could make cheaply and sell quickly.  Anyway, he recorded a lot of groovy instrumental fillers, but Jerry Cole also recorded a lot of seriously good psychedelic guitar shit.
Many of the tracks were left on the floor from his big hitters...The Id and The Animated Egg.  And when the dust settled, where all those unused tracks ended up became the fun of the hunt.  Cole was regarded as a top-notch musician and other artists loved having him in the studio.  Wiki Jerry Cole for a rabbit hole. 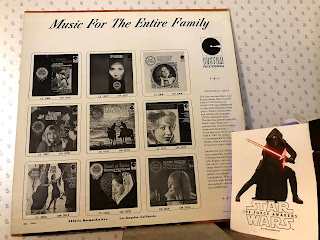 "More Psychedellic Guitars" (back)
Back to this album..."More Psychedellic Guitars."  As for the music, no psych here.  This is strictly a groovy "spin in the background" album.  No stand-out instrumentals.  No favorite tracks.  Nothing terrible either.  It is what it is.  A snapshot of music pages being turned.  There are no nuggets, but fun to own because of how the record company unintentionally misspelled "psychedelic."
I found my copy at an AOK swapmeet.  It is on the Custom Records label...an off-shoot of Crown Records.  I think I paid $5 for it.  Also, keep your eyes open for the many "101 Strings" records out there.  Jerry Cole tracks can be hidden on them and the records are usually pretty cheap.  Word of Warning:  Many of the Jerry Cole song titles are often changed from one album to the next.  It's some weird shit.  Have fun. 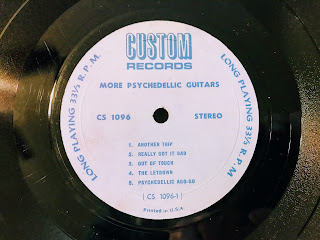