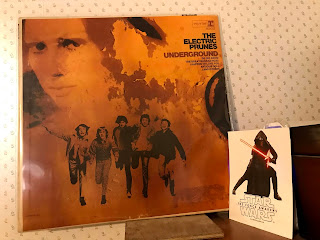 "Underground" - Electric Prunes (1967)
The Electric Prunes were the first artist represented on the iconic "Nuggets: Original Artyfacts from the First Psychedelic Era"...with their psych-baked single "I Had Too Much To Dream Last Night" from their debut album.   On their sophomore album, "Underground" the band totally commits to the psych-train with relish.  Almost every song is seasoned with various measures of psych trippyness.  Fuzzed-out guitars and studio effects trickery.  Garage dirtiness and shadowy atmospheres.  Only one song feels out of place...the silly country twanging "It's Not Fair."  The song is not exactly bad, but it does have a throw-away feel to it.  Still, "Underground" is highly recommended for fans of that early psychedelia wave. 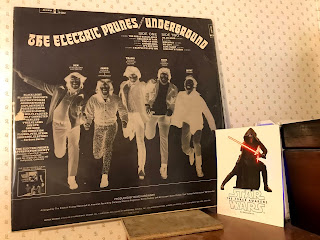 "Underground" (back)
Favorites include "The Great Banana Hoax."  The song jumps from garagey pop-psych to hot acid freak and other surprises.  Everyone brings it and everything works.  ”Hideaway” is delivered by fuzz-burning guitars and smoking drums.  "Wind-Up Toys" and "Antique Doll" are a two-fer with both having wonderful ominous vibes and studio trickery.  The soft vocals keep things edgy.
I found my copy last year at a garage sale for under $20.  It's a mono white label promo that had been well taken care of.  The back cover has..."The Electric Prunes Appreciation Society (Because "Fan Club" Sounds Undernourished)" with an address for fans to write them.  I always thought the cover was strange and interesting.  When I had the chance to interview the Prunes lead singer James Lowe, he explained how the band came up with the album cover.  You can read about it here. 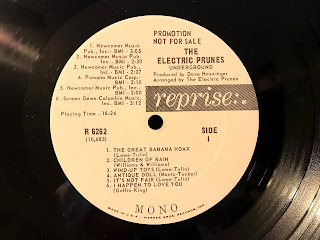