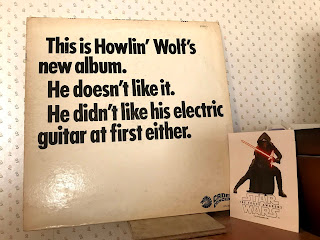 "The Howlin' Wolf Album" - Howlin' Wolf (1969)
Howlin' Wolf might not have liked the time he spent making this record as the story goes, but that doesn't diminish in the least just how much I enjoyed it.  Even some of the most pissed-on albums have been fondly embraced.  This is not your traditional Howlin' Wolf blues, but it doesn't drift too terribly far from the roots.  This is blues with a psychedelic bend that avoids many of the familiar cliches.  Oh, and like it or not, it does kick some Howlin' Wolf ass.
Members of Rotary Connection back up the legend and help fill the office with some good noise.  And guitarist Pete Cosey, who played with Miles Davis for a long run is especially fresh letting his guitar loose to trip and freak.  Cosey takes many of the songs for a little fuzz and wah-wah ride and is a big reason the album is so much fun. 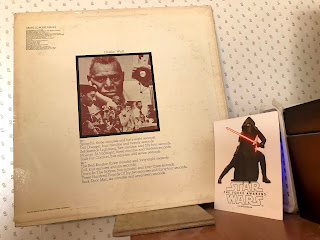 "The Howlin' Wolf Album" (back)
Favorites include the psyched-out "Evil" and is the trippiest spin.  The classic "Smokestack Lightnin'" slips into a very cool hypnotic groove.  "Built for Comfort" is fuzzy and funky and I've never heard a bad version of this one.  "Tail Dragger" has great Wolf vocals and excellent Cosey guitar play.
The Cadet Concept label was a branch of Cadet Records and used for their more experimental artists and albums like Status Quo and Rotary Connection.  And for what it's worth, RS ranked Howlin' Wolf #54 on their list of the "100 Greatest Artists of All Time." 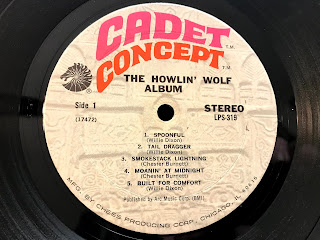 I'm new to your blog & I love it. I've added your blog to my blogroll, located on my sidebar. I've also just heard this album for the first time. While it isn't quite as good as his 1st 2 studio from the 50s this is great. It's a shame Wolf and the critics didn't like it. Thanks for letting us all know about it.

Thanks, man! Glad you found us. And I've been diggin' your music place..."Bloggerhythms" as well. This is my first and only Howlin' Wolf. I don't actively seek out blues albums, but there are a few iconic blues guys I'll pick-up...if I get lucky. But this Howlin' Wolf cover?!! How can ya not want to take that home! Stay safe out there. And stay lucky. ~casey