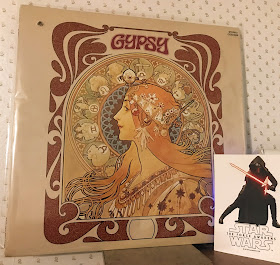 "Gypsy" - Gypsy (1970 - Rei 1979)
Gypsy's self-titled double-album debut has a sort of splattered psych-prog vibe. There is an enjoyable headiness about it, but the album never quite commits to either genre.  This is not to disparage at all.  "Gypsy" is a highly enjoyable spin.  The music has a much more melodic sensibility than I expected, and not of the cheap variety.  The musicianship on this square is tight and intentional.  And well-honed.  And that's no wonder.  In 1969, Gypsy was the house band playing every night of the week at Whisky-a-Go-Go in West Hollywood.  They worked it out!
There's some really, really good stuff to be found here.  Gorgeous layered vocals ride atop soaring keyboards and guitars that are both catchy and fearless.  Gypsy, from the Land of a Thousand Lakes, was a step or two ahead of other bands that would later become familiar AOR radio fodder.  Not everything rides the curl on this double album...but there's nothing to lift the needle on either.  As it is, it's a fine debut and one that should've taken them across the goal line. 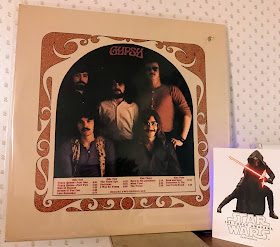 "Gypsy" - Gypsy (back)
Favorites include the first three tracks on side one and the last 3 tracks on side four.  And I enjoy "The Third Eye" which falls somewhere in the middle.  It's a dreamy jazz-tinged track that hits all the right buttons.  There is nothing jarring or that feels out of place on this square so the listener can relax and just dig in.
My copy is a nice reissue on the Cognito label, a branch from the K-Tel tree, but don't let this deter you.  The record sounds fine.  The cover also has a nice, almost textured, feel to the touch that I like.  However, someone at Spektrum thought it would be cool to place the price sticker on the back of the album to cover-up an ugly, gnarly bb exit hole that I discovered later after I got home.  It had to have been intentional.  I know this happens out in the wild, and buyer beware, but I expected better from a record store.  A reasonable level of honesty anyway.  But then, to top it off, the album was in their new arrivals bin!  The tribulations of a record buyer.  A better copy will come along.  Here is a link to the interview I had with singer/keyboardist, James Walsh in 2016. 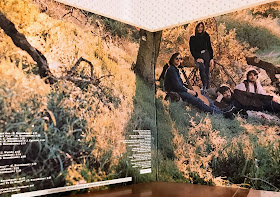