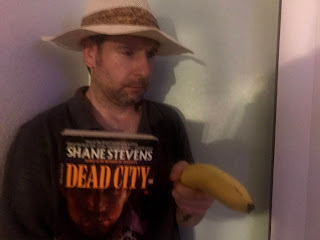 "Dead City"
by Shane Stevens
(1973)
Paperback, 307 pages
NO SPOILERS:
As many know from watching "Goodfellas and "The Sopranos," there are different ranks a member of a crime family can aspire to.  "Dead City" shows us a world where violent paybacks are the norm and loyalty is never bulletproof.  A world where nasty values and cruelty are the roads most traveled.
In this novel, we are introduced to two racket guys.  One, an up-and-comer learning the ropes.  One, a long-time wannabe climbing the ladder.  The author, Shane Stevens, gives us a story of ambition and how it can make or break a man in the dark streets.  A few are destined for power and the rest quickly learn their level of competence and settle into their own niche.  But then there are just some guys who just don't know.  "Dead City" is a fast, entertaining story...dark, depressing, and wonderfully told.  FWIW...Stephen King is quoted as saying, "One of the finest novels ever written about the dark side of the American Dream."
"City Drops Into The Night" - The Jim Carroll Band / "Catholic Boy" (1980)
Good stuff.
Casey Chambers
Follow Me On FACEBOOK
Posted by Casey at 11:46 AM