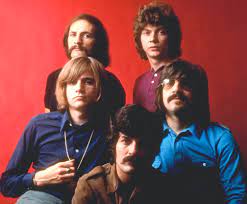 "It was really interesting
because audiences at first
didn't understand
what was going on."
~ John Lodge ~
Since 1967, when The Moody Blues began recording their groundbreaking album "Days Of Future Passed"...bassist, singer/songwriter John Lodge has been a creative force helping meld symphonic orchestral side dishes with driving rock and roll sensibilities.  And for 15 studio albums, the Moodys made some heady mind candy that both rocked us out and chilled us out in satisfying measure.  Not an easy line to walk.
Harder still is taking a 5-year break from the music park only to return in an even grander fashion.  But that's what The Moody Blues did.  It was the MTV generation that saw The Moody Blues pick up the gauntlet once again and string together another run of successful albums.  And even during the band's hiatus, John Lodge, with longtime friend and bandmate Justin Hayward, recorded the album, "Blue Jays"... which is now considered by many to be one of the lost album treasures of the 70s.
And so in 2018, after more than 50 years and selling over 70 million albums, The Moody Blues were finally inducted into the RnR HoF.  (A much too long a wait, to be sure.)  As for the recent inductee, John Lodge will soon be releasing an EP of new songs.  And vinyl fans will be excited to learn that later this year, a live double gatefold album from the "Royal Affair Tour" is in the works.  It's peak hour, my babies, and we be steppin' in a slide zone.  John Lodge.  Go get you some.
John Lodge Interview --  June 2021 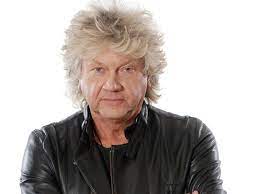 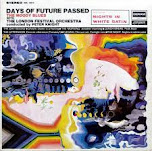 "Days Of Future Passed" - The Moody Blues (1967)
John Lodge:  Well, we didn't know what we were doing, to be honest. (laughs)  We knew what songs we were recording.  But we didn't know how it was going to be received by the record company.  The record company was expecting us to take Dvorak's "New World Symphony" and put lyrics to the melodies.  We didn't do that.  We did our own version.  Our own album.  We chose "Days Of Future Passed."  And I remember it only took a week to record the whole thing and mix it.  Can you believe it?  With orchestra!  We had a playback on the day it was mixed for the record company...and they just didn't understand it at all.  And fortunately, there were two guys there.  The head of Classical at Decca records and an American guy called Walt Maguire who was Vice President of London Records in New York.  And they understood it.  They understood the album completely.  And they became our mentors really. The rest, as they say, is history. (laughs)
"The Sun Will Shine" - John Lodge / New Single (2021)
Casey Chambers:  It's interesting that the most famous song from that album didn't become a huge hit until several years after the album first came out.  What was going on?
John Lodge:  I think it was because it was too long. (laughs)  In those days, a record had to be like...two minutes and 30 seconds long.  "Nights In White Satin," without the orchestra was four and a half minutes.  And with the orchestra, it was six minutes.  No one would play it.  But what happened in America was FM radio.  And college radio importantly.  College radio wanted to broadcast longer songs, however long they were.  And in stereo.  College radio and FM radio started playing our records.  It was an era, to be honest, of what they termed in America...bubblegum music.  Teenybopper music.  But bands like The Moody Blues...we realized that real music...which is what we were trying to create, was gonna last forever.  It was music we wanted to do.  We were traveling a different road from everyone else.  A few bands in the U.K. joined us really.  Pink Floyd. Genesis. Led Zeppelin.  We were on this totally different road from AM Top 40 records.
Casey Chambers:  I remember hearing your song..."Rock 'N' Roll Over You"...featured in the famous ice chopping scene in "The Karate Kid Part II."   And sure enough, I recently heard that same song in the series..."Cobra Kai." ("The Right Path" - S:3-E:4 - 2021)  "Rock 'N' Roll Over You" is very much a part of the 80s, and yet 35 years later...there it is again!  Perfect.
Cobra Kai Soccer Scene
John Lodge:  I was flabbergasted when the movie was released and my song was in it.  I was knocked out.  And "Cobra Kai"...I didn't know what the series was, to be honest.  But my son and all his friends...they knew.  My publisher came to me and said, "Cobra Kai" wants to use one of my songs.  And I saw the episode, and yeah, I was pretty proud of that.  It seems to have stood up to the test of time.
Casey Chambers:  The Moody Blues were inducted into the 2018 Rock and Roll Hall Of Fame.  A big congrats to you again.  What was the induction night like?
John Lodge:  The usual chaos in the day. (laughs)  Everybody busying themselves.  Everybody being incredibly important as you can imagine.  It was predetermined that we'd perform "Nights In White Satin," of course.  But we opened correctly with "I'm Just a Singer (In a Rock and Roll Band)."  We played "Your Wildest Dreams."  And we ended the set with "Ride My See-Saw."  It was a natural progression, I think, of what we should do as The Moody Blues.
"Ride My See-Saw" - The Moody Blues 2018 Induction Ceremony
And I never write things down.  So when they asked me for my speech, I said, 'Ya just have to trust me. I will say what I feel on the night.'  When I went on stage, it was then the enormity of it hit me.  That the fans out there, not just in the audience, but around the world, had voted me and The Moody Blues into the Rock and Roll Hall Of Fame.  It was like...how can I thank so many people?  On a personal aside, Buddy Holly was my absolute hero.  And suddenly on stage...for just a minute...I'm standing next to Buddy Holly.  I'm standing shoulder to shoulder.  Here's me...this guy from Birmingham, England from a working-class family...standing next to my absolute musical hero...Buddy Holly.  And that's what really crowned it for me.
Casey Chambers:  Congratulations again on your induction.  Thank you very much for speaking with me today.  It's been a real honor.  And thank you for all the great music.  Stay safe out there.
John Lodge:  Thank you very much.  Good luck to you.  Stay safe.  And continued success in whatever you do.
John Lodge Official Website
John Lodge Official Facebook
Good stuff.
Casey Chambers
Follow Me On FACEBOOK
Posted by Casey at 10:50 AM

Have always appreciated the Moodies music.