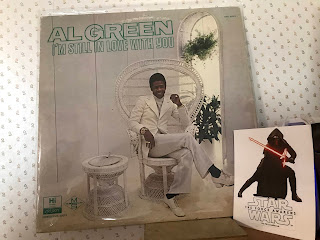 For whatever reason, I seldom see any Al Green albums in the wild.  Nice copies are just scarce and hard to come by.  For a guy who hit the sacred trifecta in the early 70s...well...those albums be hiding.  But hey, I finally have one now.  "I'm Still In Love With You" was his 5th studio album, but it was the middle child in his powerful trilogy of albums squeezed between "Let's Stay Together" (1972) and "Call Me." (1973)  Each considered one of his masterpieces.

Everybody should know Al Green by now, but for those who haven't the pleasure, Green's vocals are very distinct.  Beautifully unique.  Warm and romantic, and funky when funk is necessary.  And on this album...mercy!  The horns and drums absolutely pop.  And in just the right measure.  Just enough to let you know they are in the house but they have no plans of moving in.

Al Green wrote seven of the nine songs and four of them charted.  The other two songs were covers.  One is the Kris Kristofferson penned "For The Good Times" and is especially nice.  Absolutely kills it.  There is plenty of love and happiness and occasional heartbreak found here and it is all good.  I've yet to stumble upon Al Green's other two monster albums from his sacred trifecta, and many think they are even better. 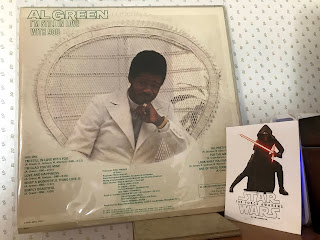 All should be familiar with the hits here, but deeper track favorites are "One of These Good Old Days" and "For the Good Times."  Surprisingly, the classic "Love and Happiness" failed to grab me on the first lap.  Even though it ranked 98 on RS 500 Greatest Songs of All Time, I had to go back for a second and third helping of the album...before I got it.  It was where the song was placed on the album that bothered me.  I think the epic "Love and Happiness" would have been better served as the closing track on side one or side two rather than squeezed into the middle.  I was still trippin' on the catchy pop-soul that was tearing my heart out and I just wasn't ready to answer the other door.

"I'm Still In Love With You" is on the smaller Hi Records label out of Memphis and was distributed by London Records.  My copy was found at a local Wichita record swap for $9 simoleons.  And it was the only Al Green I saw that day. 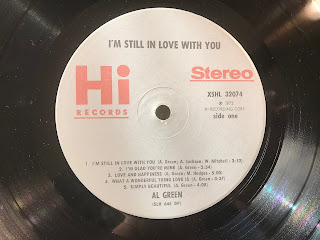 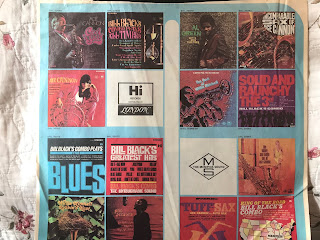