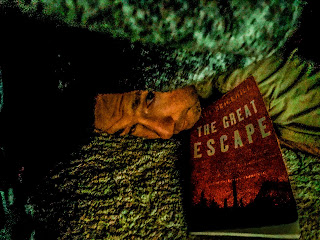 “The Great Escape” is an intensely detailed account of prisoners held in a German POW camp known as Stalag Luft-III.  The camp was made to hold the riskiest of war prisoners.  Author Paul Brickhill, who takes us into this camp, was himself a prisoner.  The guards were constantly on the lookout for any escape tricks.  Scrutinizing every movement they made.  Tunnels were not unheard of, but they were almost always unsuccessful and extremely dangerous.  And, as you can imagine, digging one is a ton of hard work and just one snafu and...pffft!  For the prisoners to have their best chance of pulling this off, the tunnel has to be deeper.  The tunnel has to be longer.  And the tunnel, of course, has to be dug in absolute incognito.  And not just one tunnel this time...but three!  And with prison guards constantly eyeballing them...well...that's a lot of major awesome chutzpah.  Somehow, and this is not a spoiler,  they succeed.  The amazing resourcefulness and incredible fortitude and courage these guys showed was...jaw-dropping.

There is no Steve McQueen...famously motorcycling over and through fences here, but apart from a few liberties, the action movie based on this story follows pretty close.  And make no mistake, this does not have a happy ending.  Only 76 prisoners actually made it through the tunnel,..and nearly all were recaptured.  And a huge number of those escapees were put to death by guards under Hitler's order.  Later, those same guards were arrested as war criminals.  Author Paul Brickhill's retelling of this incredible escape may not be as flashy as the star-studded film, but then again, the truth here cuts much deeper.