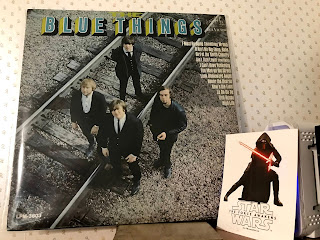 The album cover reminds me of an early "Twilight Zone" episode where four young strangers dressed in black boots and leather jackets rent a house in a small town and have the whole neighborhood peaking through their curtains.  In 1966, and hailing from the midwestern town of Hays, Kansas, The Blue Things probably got that a lot.  These boys from the plains with their cool and exotic swag and swagger played garage-tinged folk-rock that was out in front.  The band's lone self-titled album has a bit of Beau Brummels going on and little hints of that folkier jangle-jangle the Beatles were working.  But they had their own walk.  The album is a really enjoyable spin that still holds up today.

Favorites are the catchy "High Life" that nudges The Beatles.  The garage "La Do Da Da" is killer stuff and one I imagine they tore up live.  "Doll House" is another hidden gem.  The band also has an excellent take on Dylan's "Girl Of The North Country" as well.  On the back cover is a nice epistle from John D. Loudermilk espousing his joy for The Blue Things.  Original copies are getting harder to find and are starting to take some real cabbage.  But deals are out there.  My copy was an online purchase.  18 "green things" shipped. 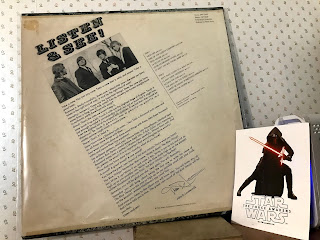 "The Blue Things" (back) 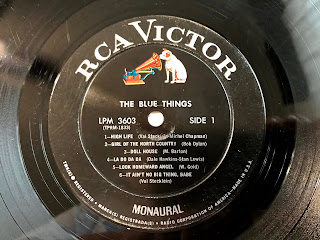