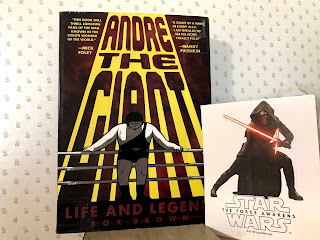 
(I stumbled upon a good-sized box filled with a variety of graphic novels at an estate sale. No official count as I've just been pulling from the box when I find time to read one.  Afterward, I post the book and go from there.)

Andre Roussimoff.  He was born with a very painful disease that caused extreme growth in his body.  He was 7'4" and nearly 600 lbs and we came to know him as Andre the Giant.  Author and artist Box Brown presents an interesting overview of Andre's life...starting from his school days until his much too early, but not unexpected, death at 46.  In between, we learn about some of Andre's experiences both inside the professional wrestling ring and out.  As well as being offered a part in the wonderful film, "The Princess Bride" playing (you guessed it) the lovable giant, Fezzik. 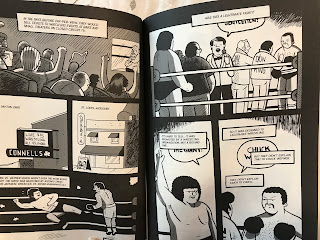 Brown only scratches the surface, but that is to be expected with this type of medium.  And yet, he doesn't shy away from showing Andre warts and all.  He does a satisfying job of moving the story along while keeping the reader's interest.  I was initially 'meh' about the artwork, but as I began turning a few pages, I found myself warming to the simpler style of penwork.   Anyone who grew up watching Andre the Giant and WWF will no doubt be familiar with many of the stories found here.  Still, for a "bio" graphic novel, Box Brown delivers up a pretty entertaining read.  I was surprised after reaching the last page, to be left feeling a sadness I was not quite prepared for.  Andre couldn’t hide...and so he didn't.  He became a giant.  Good stuff.