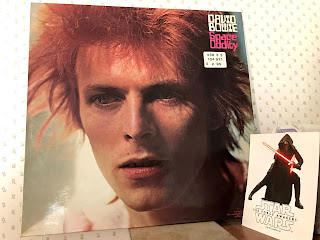 It was early February at a Wichita Record Swap that I found this Bowie square.  I was wanting to leave with something I didn't see every day and found this 1972 German pressing of “Space Oddity.”  (Originally titled "Man Of Words/Man Of Music")  Apart from the title track, I wasn't familiar with any of the songs.  This was David Bowie at the very edges of going glam and historically it's pretty cool knowing what delicious things were yet to come from him.  But he hadn't met The Spider quite yet.  That would have to wait until Bowie's next album when guitarist Mick Ronson would glitter into the picture.  And although Bowie looks very glam on the cover of this album, the songs...not so much.  Here we find mostly folk-rock given a light dusting of psych here and there.  Still, “Space Oddity” has its moments.  And if you don't let your expectations play tricks, you'll find early Bowie had some game, too.

The title track, of course,  is the Big Brutus on the album.  The song was re-recorded with orchestra and Rick Wakeman adding Mellotron.  It also has a slower tempo.  Together it gives the listener a real sense of danger and isolation.  The song just over-shadows everything else.  So much so, you might miss a few gems while taking your first lap.  “Cygnet Committee” is a folk psych lost gem and brings a familiar Bowie sound that he would successfully mine again and again.  "Memory Of A Free Festival" starts out in a folk-psych Pearls Before Swine kinda vibe before breaking midway into a trippy four-minute refrain of "The Sun Machine is coming down, and we're gonna have a party."  It shouldn't work, but Bowie pulls it off.  And "Unwashed and Somewhat Slightly Dazed" reminds everyone what a songwriting word-finder he was. 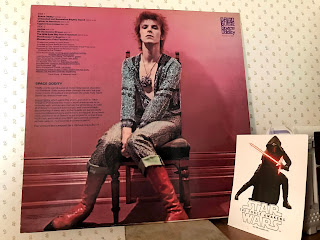 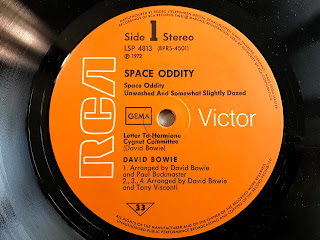