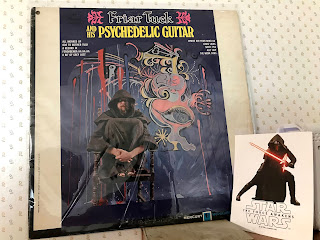 Friar Tuck was guitarist Mike Deasy, a longtime member of "The Wrecking Crew" with credits a mile long.  This one-off album was an early cash-in on the psychedelic train that was just beginning to get legs.  Remember, this was still only 1967 so the ground being covered was still mostly a road less traveled.  This is not a great album, but it is entertaining.  A fun, playful pop-psych spin with a few freak-outs thrown in to satisfy the mind-trippers.  And the songs are trippsh, if sometimes silly, but nothing sounds cheap or lacks for effort.  For a cash-in, there is still a piece of psych heart burning in the wax.

Side One is all covers with a tracklist that look like real groaners...but Deasy and singer Curt Boettcher, a very early shaker of the sunshine and psych-pop sounds that were yet to come, give the songs a fresh-take that rewards the listener.  I mean, if you're going to cover a song...at least bring something different to the table, right?!  Friar Tuck and his friends certainly abide by that philosophy. 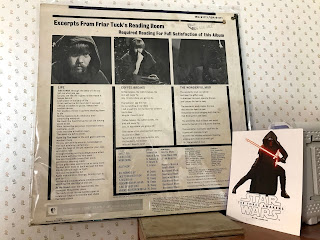 "Friar Tuck And His Psychedelic Guitar" (back)


On the flipside is all instrumentals with Mike Deasy's guitar dropping in and out from every direction with both freakouts and melody, and though not exactly heavy, he does manage to part the water a time or two.  And the bits of vocals we hear are used almost like instruments and to great effect.

Favorite tracks are the lightly lysergic cover of "Louis Louis" that builds into a fuzzburn.  The closing tracks "A Bit of Grey Lost" and "Where Did Your Mind Go" punches the Friar psych-ticket in a nutshell.  This "Friar Tuck And His Psychedelic Guitar" square is a mono Mercury promo copy with a bb in the top corner.  "Oh baby, we gotta go now." 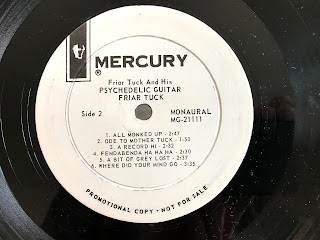