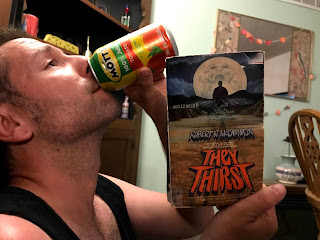 NO SPOILERS:
This isn't your fancy dandy vampire Lestat bloodsuckers.  These vampires are much more grungy and a lot creepier.  They are led by a young vampire king planning to take over the city of L.A. turning the entire population into his own personal vampire suck-buddies.  The vampires adhere to most of the familiar lore of vampirism.  No sunlight, crosses, garlic, and other snafu's.  And with that, the game is on.  There are also plenty of creepy and memorable moments that Robert McCammon scatters throughout his story that are both disturbing and deliciously strange.  The undead wrapped in bedsheets.  The vampire king's human minion, Roach.  McCammon has a way of detailing scenes by catching the light from unexpected angles.

There are a variety of characters thrown into the pot, as well.  Some good.  Some, not so much.  They all add a bit of flavor to the stew.  And yet, with all this seasoning, there was no one I really cared to share an umbrella with.  And this causes a bit of a disconnect in a couple of places that make what should have been super suspenseful, to fall just a little bit flat.  Overall, the story is still very exciting, but..." missed it by that much!"  "They Thirst" is not the scariest vampire novel you'll read from this heavily populated genre, but it does have fast legs that will carry you long into the night.