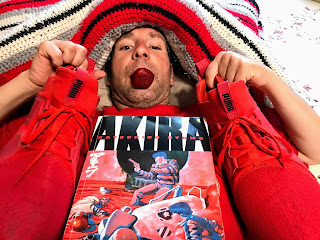 
(I stumbled upon a good-sized box filled with a variety of graphic novels at an estate sale. No official count as I've just been pulling from the box when I find time to read one.  Afterward, I post the book and go from there.)

NO SPOILERS:
This is an anime neo-futuristic sci-fi story where groups of young, Japanese cyberpunk bikers run the streets of Tokyo.  A time of rampant kid-gang violence and anti-government terrorism.  And there are two friends...Tetsuo and Kaneda...who somehow get caught up in a nefarious and dangerous government cover-up involving powerful psychic energy.  And though the action is fast-paced, there is very little character development to hang a hat on.  At least with "Akira, Vol. 1." (There are six volumes in all.)  Adding to the lack of development, there was just a bare-minimum of narrative to further the story along.  Everything had a bit of that cold Clockwork Orange vibe.  At over 300 pages, I wanted to root for somebody, anybody, but mostly, I was indifferent. 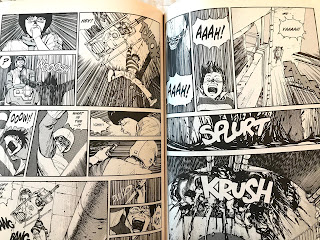 The artwork is both amazingly fresh and curiously exaggerated.  And, for me, occasionally frustrating.  A few panels that looked fantastic left me scratching my head who the players were.  The segue was that bumpy.  And yet, despite the darts I've thrown, "Akira, Vol. 1" is like a Kramer on the wall.  You can't look away.  Look, I admit I'm fresh blood when it comes to anime, so maybe the stuff will grow on me.  What I do know is that in 1984, "Akira" was pretty groundbreaking and considered highly influential.  I do believe there is enough good to be found here to want to see this story to its conclusion, should there be another in my box.