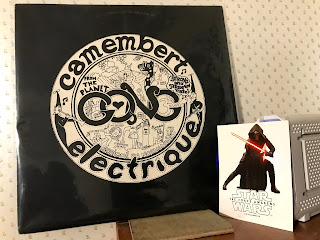 I'm not that familiar with Gong, this being only my second album to spin, but this was the band's sophomore square and it's a wonderful avant-garde head trip.  It's proggy with a trippy psych flavor.  All with a current of free jazz moving around underneath.  The music sounds very ambitious and forward-thinking.  Founding member Daevid Allen has a lot going on inside his head...and it's bizarre but brilliant in all its reveal.  The ideas and music, as hinted, are strange, but I never got the sense Allen was trying to have us on.  Everything sounds premeditated.  Nothing flip.  And somewhere in all the madness is a genuine sincerity that allows the listener to trust the process.

"Camembert Electrique" is an album that requires your attention.  The first time I played it, I was busy doing other things and missed it.  Later, I put on some headphones and gave the album both my ears.  Some of it still went over my head, but I enjoyed the journey.  "Camembert Electrique" might even be a concept album.  There is a "Gnome" introduction and "Gnome" departure.  But if it is, the concept escapes me.

"Fohat Digs Holes in Space" and "Tropical Fish: Selene" are my two favorite songs on the album.  They both give great headphone.  "Tried So Hard" is another fantastic track.  The song is kinda floaty and jammy and probably the most accessible song on the album.  And it gives your mind time to regroup.  Straight-up, this album has aged extremely well.  My copy is a 1974 Rei on Caroline Records, a branch from the Virgin label. 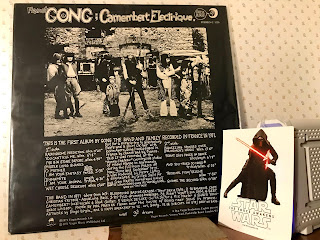 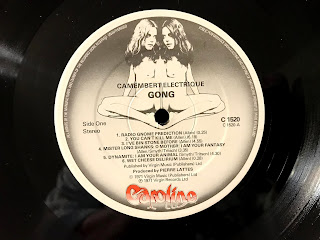