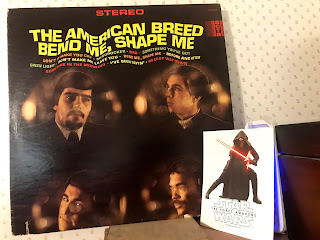 The American Breed's second album is filled with garage pop-rock and a few softer songs.  The musicianship and harmonies sound just fine.  I was hoping the album would be as psych as the cover, but the band only dips their toe in that direction.  Still, the songs are good without being too cotton-candy.  The American Breed was a band out of Chicago, so there are occasional horns.  But it's nothing to get hung about.  This isn't really a horn album.  The horns are not over-used, I mean.  When the horns show up, they paint with brushes, not rollers.

The stand-out track for me was "Don't Make Me Leave You."  The song is really good with some stinging guitar.  Good stuff.  Their hit "Bend Me, Shape Me" still sounds tight and groovy as ever.  The opening track, "Green Light" has a lot of garage-pop energy and includes a long siren wail being cranked in the middle.  Just the kind of idea guys come up with when goofin' around in the garage.  And I liked it.  ‘Mindrocker’" starts off with some fantastic harmonies similar to the band, Gypsy.  I like the song, but it could have been so much more.  For the slow-dance at the sock-hop, "No Easy Way Down" sounds very much a part of its time.  The song was written by Goffin & King.  Overall, I would say Side One is the stronger half.

I see this album going for five simoleons or less all the time.  And yet, I would always leave it behind.  Finally, I picked up a copy from a seller affectionally known as..."Garageman Gary" and took it home.  It was clean and looked like it had hardly been played.  And at that particular moment, I felt just like Charlie Brown looking for a Xmas tree.  "It needs me." 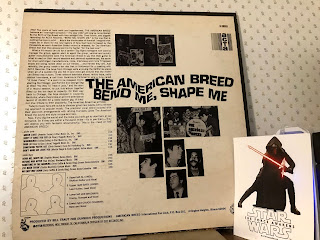