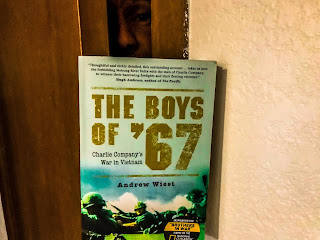 "The Boys of ’67: Charlie Company’s War in Vietnam" by Andrew Wiest
Softcover, 448 pages

NO SPOILERS:
This was the first group of "Charlie Company" that was drafted into the Vietnam war circa 1967.  These young men were called from all over the country, but what was extremely unusual...this particular group stayed together from day one.  From the few short weeks of basic training...right into the enemy fire and landmines of the Vietnam jungle war.  How frightening and dangerous that all must have been.  Andrew Wiest gives the reader a pretty good overview of these young guys.  Kids really.  Their backgrounds. Their personalities.  Their dreams.  Their fears.  And their especially strong bonds of friendship that are only made through shared experiences.

There are also several pictures of the Charlie Company included in the book.  To be able to put real faces to so many of the names...after reading about their victories, losses, and tribulations...was both haunting and heartbreaking.  You look at each photograph and try to see if there's anything there that gives away who will make it back and who won't.  I was hoping there might be a clue.  But no.  Nothing.  Death comes as it will for everyone.  And that's scary stuff.