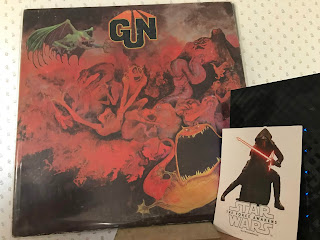 I like this album a lot.  "Gun" is filled with great guitar riffs and fuzz.  And rocks with ideas more interesting than most.  There is some psych toast throughout and proto-prog moments.  Hell, this is one of those albums that crack the egg for proto-metal, as well.  And surely must have influenced later bands to come.  Plus, the vocals are really good.

Gun was a power trio from the UK who recorded two albums, this being considered their best.  Two of the members, the Gurvitz brothers, would later go on to form the Baker Gurvitz Army with drum punisher and legend,  Ginger Baker. (rip)  “Race With The Devil” is the band's signature song that opens this album and it tears the horsehide right off the baseball. (My 2019 World Series reference.)  But “Yellow Cab Man” is the lost gem and it wails like a banshee, as well.  It may be my favorite track on here.  Both are fantastic.  And then there's the 11-minute closing track “Take Off.”  It's a little space rock and psych rock and it blisters paint a wee bit.  Setting the table is a spoken word countdown introduction to the song.  How can you not love this stuff?

My copy was scarfed off eBay.  $20 shipped.  I'd seen The Psychedelic Experience and The Hog's Ear Report, as well as others, show their Gun album with relish, but I could just never find one loose in the wild, record shop or otherwise.  So I had to go fishing.  This is probably common knowledge, but this was the first album cover design credited to Roger Dean.  That's pretty cool, I think.  Especially with the number of albums Roger Dean went on to design.  And for me, I enjoy it when Dean deviates from his recognizable “Yes” art style.  I'm kind of burned out on that noise. 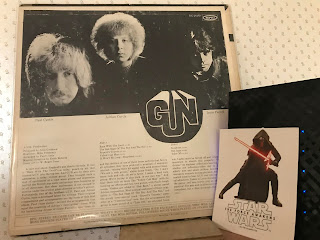 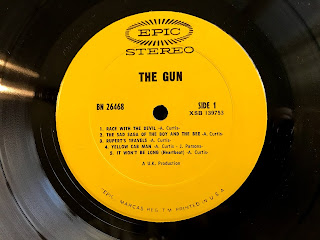