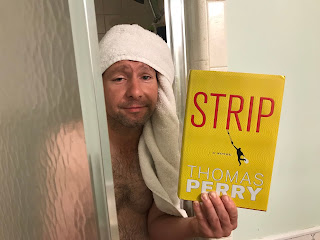 
NO SPOILERS:
This Thomas Perry novel was just a late summer toss read.  Nothing deep.  A story to chew on while waiting for the leaves of autumn to begin changing their clothes.  Just a quick in-and-out.

The story revolves around an aging mob boss who learns his strip clubs are getting robbed and the new guy in town he mistakenly fingers for the job. A guy who just wants to eat his sandwich in peace. A guy you shouldn't poke with a stick.

There are a few other characters thrown into the mix, each of variable shades of badness and stupid, and to be honest, I found these misfits a lot more interesting.  However, Perry does write some pretty good parlay betwixt them all and throws in a good twist or two to twerk the story along.

But at the end of the day, it was really hard to find someone to toss my keys to and drive.  Plus, the story took a couple of louies where I would've preferred the writer feint in another direction. But that one, my friends, is on me.

So what does this all mean?  It means I wasn't too much concerned about who came out on top.  Still, the pages turn fast and though "Strip" didn't quite hit the proverbial sweet spot, it was entertaining enough that I didn't regret it.