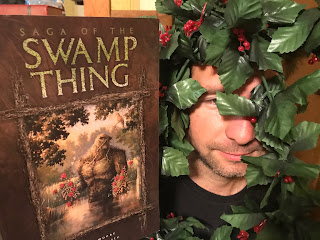 (Last fall, I stumbled upon a good-sized box filled with a variety of graphic novels at an estate sale. No official count yet, as I'm just pulling from the box when I find time to read one.  Afterward, I'll post the book and go from there.)

No Spoilers:
When I first think of Swamp Thing...I think of Adrienne Barbeau's breasts.  And then the strange creature from the rather cartoonish 1982 movie of the same name.  But mostly breasts.

The title character suffers an accident from one of his experiments...and it changes him into human vegetation.  A broad-shaped "thinking man" plant that still keeps human boundaries of consciousness.  It's a bit of a rather moving, botanical mind-flip. 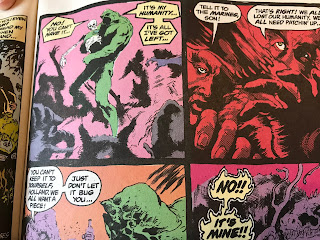 "Saga of the Swamp Thing" (inside)

The artwork is kind of old-school cool, but it does have a couple of forgivable outta place panels that just didn't work for me.  But hey, that's just me.

Swamp Thing is a wholly original character. A beautifully sad "hero" that's hard to wrap your mind around...but you want to try.  Look, the Swamp Thing will either hit your feels...or leave you yawning.  There's very little middle ground here.

For me, I found myself leaning toward the former.
Sure, I still like A.B.'s breasts better...but this hit me right, too.