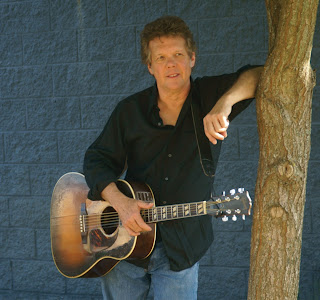 Steve Forbert is a little older, obviously.  Wiser, well probably. He continues to wear his heart on his sleeve, but he keeps his arms a little closer to his vest.  And, I suspect, he's not near as "careless in his way"... not in the way that youth allows.  But he continues to write with a painter's eye.  And he lets us ride shotgun while he discovers his lot.  So...compromised?  I guess so. But fearless?  Hell yeah! 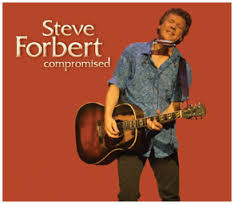 Casey Chambers:  Steve, I'm really excited about the release of your 16th studio album..."Compromised."  It's good to know you're still..."howling out words and banging out chords."

Casey Chambers:  One of the songs, I especially enjoy from the album is..."You'd See The Things That I See."  And you made a video for that song, as well.

Steve Forbert:  Well, thank you.  In a manner of speaking.  We assembled some photographs.  And some of them, we were the first people to be shown.  There were like two photos discovered from the actual day when John met Paul...and one of them actually shows John Lennon in a parade.

Steve Forbert:  Yeah.  It was nice to visit Mendips.  The famous boyhood home of John Lennon.  Yeah, it was terrific.

Casey Chambers:  When were you over there?

Casey Chambers:  How did this particular song come together?  Were you writing it while you were over there?

Steve Forbert:  Yeah, I was working on something else, but this was so impressive that I began to think about what might have gone through John's mind when he got back home and started thinking about it.  'What on earth should I do about this hot new kid I just met?  Should I ask him to join the group?  What's that going to be like?  And it's my group.'  It's just the little thoughts that go through his mind.  Would he feel threatened or would he feel...y'know...obviously what he decided was to forget feeling threatened and go with a winner.


Casey Chambers:  Yeah, the what-ifs.  Very cool.  Going back a few years, and this is going back to your 5th album, "Streets Of This Town" (1988) is the song "I Blinked Once."  Do you still play this one in concert?

Steve Forbert:  Yeah, yeah.  I play it occasionally.  I had a good version of it in Belfast about a month ago.  Someone requested it over and over again and I decided to play it.

Casey Chambers:  It's a song that reminds us of how fleeting time can be.  And one you wrote nearly 30 years ago.  Are you ever struck by that fact?

Steve Forbert:  Well, of course as you know, the song ultimately deals with what we call mortality.  So, perhaps it's a little more poignant to me...a little later in life.  But I sing it, if someone wants to hear it.  I take requests in my shows all the time.  It's part of the fun of it.


Casey Chambers:  The show "Fridays" was always considered the step-child of SNL.  But they always pulled in some good musical guests.  And I saw you perform one of my favorites..."Get Well Soon" on an episode.  What do you remember about that?

Steve Forbert:  Well, it was in Los Angeles.  We were on tour.  It was live.  It was during the week John Lennon was shot so everybody's thoughts were on that.  And y'know...it was a little more of a challenge to go on there and sing when you knew that everybody was in sort of a state of shock.  So that's kind of what I remember about it.  But we were set to play and we showed up and did the show.

Casey Chambers:  And it was a good performance.  Even just now learning the backstory, the crowd still appeared to be into it.

Steve Forbert:  Yeah, well maybe they just wanted to be jolted out of it.  We just tried to penetrate the mood and do a good performance.


Casey Chambers:  That would have been a tough week.  Nicely done.  Jumping back to the new stuff, the title track..."Compromised"...which opens your album sounds like classic Little Stevie.  Really good stuff.  How did this song come together?

Steve Forbert:  The idea for that song was started a couple years ago during one of those times when they...Congress was about to shut down. They were at a stand-still and about to cut the lights out and all that.

But that was all just sort of processed through my filters...and became a song that sounds almost like a regular interpersonal...a love song. But that's what triggered it.

And it came out sounding pretty meat and potatoes for what I do.  So we put it first on the record so it would open up with something that was...y'know...not a curveball in any way.   We're fixing to put up a solo version of it today on my website.

Steve Forbert:  Well, the ones you're talking about, the way they cut those songs in...it's pretty brief.  It's not a life changing experience.  I'm glad they used those songs.  And in Richard Linklater's next movie, "Everybody Wants Some"...I think it's true to say..."Romeo's Tune" is gonna be used again.

Casey Chambers:  Yeah!  Meet me in the middle of the movie line.  Well, "Romeo's Tune" is your signature song.

Casey Chambers:  One of the great things about that song is the catchy piano melody.  Just brilliant.  Did you know from the get go the piano was going to be such an important part to the song?

Steve Forbert:  Oh yeah.  Yeah, that was part of the song when I wrote it.  We had a guy named Bobby Ogdin play it at the session in Nashville.  And he really brought it to life.  He's a well known Nashville recording piano player and he was right at his peak at that time.  He made that...y'know...I showed him the figure and he played it with a wonderful voicing.  Of course, I'm really glad it's standing the test of time.


Casey Chambers:  Were you surprised when the label wanted to follow it up with "Say Goodbye To Little Jo"...since you had the 'S' word in that song? (laughs)

Steve Forbert:  Well, I was surprised.  And it cost us some time because we had to do an edit and take the 'S' word and just change it to the word...'it'.  And by the time we had done that, I think we had lost some momentum.  It cost us some valuable time, that word.  Yeah, I was a little surprised they wanted to make it the second single.  But yep, that's the way it went.


Casey Chambers:  Were you leaning towards another song?

Steve Forbert:  I was probably leaning more toward..."The Sweet Love That You Give (Sure Goes A Long Long Way)."

Casey Chambers:  A great song, too.  A runaway train.

Casey Chambers:  Steve, what are a couple of your favorite albums? 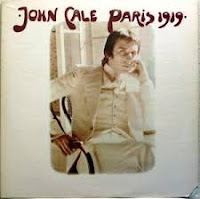 Casey Chambers:  Didn't you have an opportunity to work with John Cale while you were in New York?

Steve Forbert:  I opened some shows for him over a weekend at CBGBs.  And it was really...important to me, since he had made one of my favorite albums.

Casey Chambers:  That's a nice memory-keeper.  I hear you're going to be coming out with a book.  What set the wheels in motion for this project?

Steve Forbert:   Let me see.  Well, somebody was wanting to put out a book of a lot of memorabilia things.  Photographs and backstage passes.  All that kind of stuff.  And I said to that book publisher that I'd like to do a better book than that.  Better than just some sort of a coffee table picture book.  Y'know, I'm not Rod Stewart.  I don't think such a book would really sell many copies.  Let me write a real book.  More of a memoir.  So that's how it happened.  And I found another publisher who's been very patient with it and very helpful.  So it's coming along pretty good.  It'll be out sometime next year.

Casey Chambers:  I'm looking forward to picking it up.

Casey Chambers:  You've probably been asked this a thousand times, so I'll pose it to you a little differently.  Before I let you go, how did you appear in a music video with Captain Lou Albano?

Steve Forbert:  Yeah, you could look at it that way. (laugh)  It was Cyndi Lauper's video.  They don't usually mention Captain Lou, but yeah, I think he played Cyndi Lauper's dad in that thing.


Cyndi was in a group called Blue Angel.  And y'know...I'm a music fan and I encountered that album and I liked it a lot.  They were playing live around New Jersey and New York City, so I went to see them.  I got to know her and I thought she was a real talent.  At the time, she seemed like kind of a throwback to the '50s to me.  The way she looked and sounded.  So when she went on her own and got a record deal and was making what was called a video...it was early in the game for videos...she knew I was a fan and asked if I would do a cameo in the thing.  And I said, yeah.  So that's it.  I guess that thing's been played half a million times.  I don't know, but it's one of the most played things of all time.

Casey Chambers:  Oh, at least!  And it's fun seeing you pop up in that video.  Steve, I'm gonna let you head on down the Jersey highway.  I want to thank you for taking the time to hangout.  Be safe...and have a Merry Christmas.

Steve Forbert:  Well, you too, Casey and thanks for your interest.  See you later.