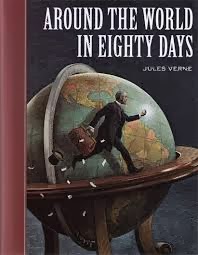 "I am
the backwards traveller.Ancient wool unraveller."
-- Wings --


Phileas Fogg, the phlegmatic "nothing worries me" guy, must travel around the world and only has eighty days to do it.  A feat believed nigh on impossible...or his entire fortune is burnt toast.

And all because of a spur of the moment wager he strikes up with a swell bunch of snooty fellas down at the Gentleman's Reform Club.  Talk about your no-nonsense itinerary! 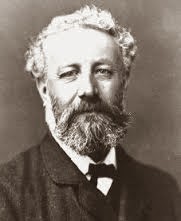 Fogg, along with his new servant, Passepartout, (I pronounce it 'Pass-the-potatoes" for fun) encounter one frustrating obstacle after another.  Bad guys, bad drugs, bad weather, bad fish, and a bad tribe named Sioux.

Along with all that, Fogg squeezes in time to rescue a young lady in harms way.  Actually his servant's the hero, but Fogg has all the dough, so he gets to bake the cinnamon rolls...(if you get my drift.)  And putting the spoiled cherry on top, some misinformed dick keeps slowing him down trying to arrest him.

Just to set the record straight, there's NO hot-air balloon within a hundred miles of Jules Verne's adventure...regardless what many book-covers show.

"The madman climbed
The steeple spire.
"Go higher" said the crowd
From down below."
Thin Lizzy


St. Patrick’s Day, I opted to review an album from a band of Irish descent. So after filling my plate with corn beef and cabbage and refilling my tall glass with green beer, I put in the CD "Vagabonds of the Western World", an offering by Thin Lizzy released in 1973.

At this time Thin Lizzy was just a three piece band led by the legendary Phil Lynott, an underrated bass player and singer-songwriter from Dublin, Ireland and was backed by Eric Bell/guitar and Brian Downey/percussion.  Lizzy had a much more soulful psycha-blues-rock burn going on...on this one...with plenty of meat on the bone.

The band kicks off this overlooked treat with a message of environmental neglect in the powerful "Mama Nature Said," a driving song that rocks without being preachy. It is interesting that forty years later the message is still a topic of discussion.


Phil Lynott adds some delicious bass work while doing his best Zappa impersonation..."The madman climbed the steeple spire and let a crystal ball tear fall on the crowd from down below," in the awesome and epic "The Hero and the Madman." And just listen to Eric Bell’s choice guitar line that plays the song out. He unfortunately left the band shortly after "Vagabonds" for health reasons, but his thumbprint is all over this album.

On the forgotten classic title track, Lynott recalls the mythological tale of the fatherless child who is blessed in the art of love but cursed to always walk alone. This could have been their breakout song with a little push from their record company, but was unjustly ignored.

"Vagabonds of the Western World"


"I am your main man if you’re looking for trouble/ I’ll take no lip cause no one’s tougher than me" mugs Lynott in his firmly tongue in cheek signature jam "The Rocker," a 5 minute exercise in machismo that was always a crowd favorite in concert.

But as anyone who is familiar with Thin Lizzy knows, Phil Lynott has never been shy in showing his romantic side. "And far away hills look greener still / But soon they’ll all slip away," is from the beautiful "A Song For While I’m Away", clearly written while traveling with his band.

"She carries a secret / the child she carries in her womb / she feels something sacred." from the achingly beautiful "Little Girl In Bloom," a gentle song about a young girl excited but nervous about telling her father she’s going to have a baby.


The CD issue includes four bonus tracks including the Irish drinking song "Whiskey In the Jar" which was remade successfully by Metallica. Thin Lizzy’s version, to my ears, is the better of the two. The other bonus tracks are average, at best, with "Randolph’s Tango" being the strongest of the bunch.


"The Hero and the Madman"


The Hero, rode a white horse
Across the desert
To where his woman was
He'd been riding
For four days
When he saw the tower
Where she was locked
In the moonlight, he left his old steed
Near the drawbridge, that he crossed
And by way of a rope ladder
He tippie-toed to where, his woman was.

"You're the only one that can save us", cried the wizard
"Or all is lost."
[Furious solo and end]

Sadly, Phil Lynott died January 4, 1986 from a merciless drug overdose.
The Hero and the Madman, indeed.