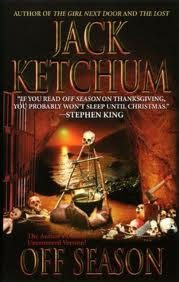 "They're running up behind you and they're coming all about.
Can't go east 'cos you gotta go south."
--> Queen <--

Horror stories about friends heading off to cabins for some rest-&-rec only to meet up with nasty strangers has been done...ten times ten.

So anybody attempting to write another one had better know how to bring it. And hard!

But it was 1980 when Jack Ketchum delivered this gut-wrenching page-turner. And even after some forced editing...."Off Season"...still received a huge backlash for its gore and violence. So much so, Ballantine Books withdrew their support after the novel's first printing. 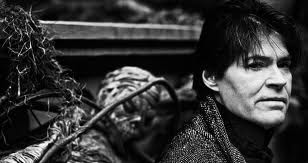 Thirty years later, this controversial gorefest still maintains cult status. It has since been reissued in Ketchum's original unedited version ...and that's really the way to go.

"Off Season" is a fast, disturbingly fun novel about surviving in an extremely twisted situation.

Veteran readers of the genre might not flinch too much...but they'll still be rewarded with a few tasty Jack Ketchum surprises and possibly a palpitating heart-dance or two.