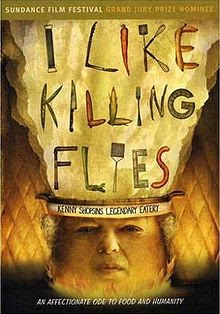 
There is a moment when Kenny Shopsin proudly recounts the time his wife brashly walked between 2 masked men holding up a fast food place because she needed more ketchup for her french fries.

It is this kind of moxy that makes..."I Like Killing Flies" (2004) an oddly compelling documentary. Opinionated chef Kenny Shopsin...is a long-standing owner of a small hole-in-the-wall restaurant in Greenwich Village.   His ball. His rules.  Or get the f*** outta here.

It’s been rumored he was the inspiration for Seinfeld’s famous ”Soup Nazi” episodes (he wasn’t) but comparisons are easily found. 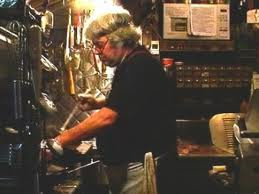 Documentaries (good ones anyway) present their subject...flaws and all.  Never overstay their welcome. And create a memory burn long after the film has been streamed. This one succeeds on all 3 counts.

The film is tagged with an 'R' rating for language. However, the 'f' words are not meant to inflame, but are simply being used in common everyday vernacular.

I suppose many will find Kenny's attitude the most offensive, but by film's end...his prickly foul-mouthed ways are almost charming. I’ll take sour honesty over sweet phoniness any day.

Ain't it great at the end of the day
When there ain't no sound around
Just me and the fence post
Staring each other down
Nothing but a big bunch of nothing
Driving me insane
Cause there ain't no voice that's louder
Than the one inside my brain
Hey you go on
Go on and let me be
Quit hollerin' at me
Good stuff!