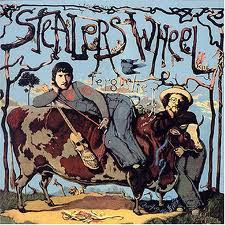 
Lost "Radio" Gem:...a single that may have charted, but deserved better.

Stealers Wheel were a talented Scottish singer/songwriting duo of Gerry Rafferty and Joe Egan...along with a swinging door of various backing musicians that never hung around long enough to get any bang on their shang-a-langs.

(Egos. Stubbornness. Poor management. All figured into the bands destruction. You can look it up.) But this is about the music.

Admittedly...Stealers Wheel...will forever be remembered for their one-hit wonder...a Dylanesque top-ten mega-hit..."Stuck In The Middle With You" (1973) off their debut album. 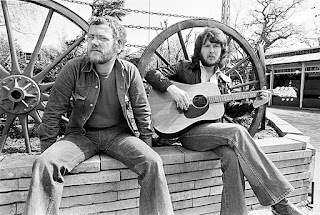 But it's their follow-up album..."Fergusie Park" (1974) that appears to have aged the best. The classic folk-rock sound is solid with tight vocals blending nicely. Well-written songs (especially from Egan) are jelly...plus Rafferty shows glimmers of his successful solo sound yet to come.

Alas...one more album...and Stealers Wheel (as we know it) were done.

"Fergy..." may not be a must-own album...but it's pleasant enough and certainly filled with more good'uns than bad'uns.

Today, Joe Egan is living in Scotland and running a publishing company. Sadly, Gerry Rafferty passed away in 2011 from health problems.


So they've made you a star
Now your head's in a cloud.
And you're walkin' down the street
With your feet off the ground.
They read in the press all about your success
They believe every word they've been told.
After all you've been through tell me what will you do
When you find yourself out in the cold.
Ah, tell me. Ah, tell me.

When you appear on the stage
There's a standing ovation
You really live out your performance
You're the biggest sensation
You breeze through the door and when you take the floor
You expect to have it all to yourself.
After all you've been through tell me what will you do
When you find yourself back on the shelf.
Ah, tell me. Ah, tell me.