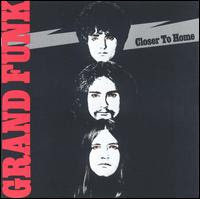 The thunderous power-trio Grand Funk (Railroad) released "Closer To Home" (1970)...with the flagship 10 minute title track that closes out the album...and forever cemented their lofty spot upon the heavy metal rock and roll shelf.

With Mark Farner's crank vocals and guitar spank, Mel Schacher's ear-bleeding bass runs and Don Brewer's thunder sticks...GFR were pulling down the elusive 11+ on the amplifier knob.
And though mostly panned by critics, GFR could flat out bring the noise. Crunching riffs and bass made for some tasty must-own vinyl for stone-rockers.
And in this instance, the remastered version is stunningly worth grabbing!

Lost Gem:--> "Sin's A Good Man's Brother"...is a worthy opening track that gently tiptoes onto your front porch and then starts kicking the door in. Rarely receives radio play, but is an absolute leviathan for your lost gem playlist.


Have you heard this gem?

Ain't seen a night, things work out right, go by.
Things on my mind, and I just don't have the time, and it don't seem right.
Ain't seen a day, that I don't hear people say, they know they're gonna' die.
This may seem a little bit crazy, but I don't think you should be so lazy.
If you think you've heard this before, well, stick around I'm gonna' tell you more.

One just like the other, sin's a good man's brother, but is that right?
You tell me that I don't, then I say I won't, but then I might.
You said this is the way it's supposed to be,
but it just don't seem right to me, and that's outta' sight.
Some folks need an education, don't give up, or we'll loose the nation.
You say we need a revolution? It seems to be the only solution.

My older brother bought an album by Grand Funk Railroad back in the day; I believe it was called, "Mark, Don and Mel."