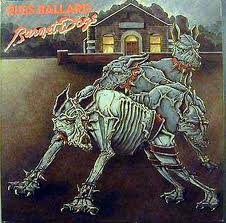 In the early 70s, British rocker Russ Ballard was providing lead vocals and guitar spank for the classic rock band...Argent. Songs like "God Gave Rock and Roll To You" and the familiar thump, thump,thumping of..."Hold Your Head Up"... never fail to grab my attention.

After leaving Argent, Ballard hit the solo road, writing songs and making records that never quite got enough push. If ya blinked, you might have thought he quietly disappeared and was tucked away neatly into the crowded and oft-forgotten Rock-n-Roll footnote pages...BUT HOLD YOUR HEAD UP BABIES!

I wasn't hearing Ballard on the radio much...but I was hearing plenty of RB songs recorded by other famous artists. And it was klassic kool learning who some of them were. 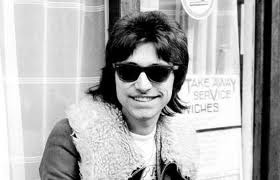 And while flipping through stockpiles of my Pop's eclectic album collection, I stumbled upon a Russ Ballard offering..."Barnet Dogs" (1980). A recommended platter of rockers...played with fire and fun...with only a couple of hiccups.

Add it up. Russ Ballard be bad!

Lost Gem:--> "Riding With The Angels" ...a delicious..."roll down the windows & press the pedal"...freeway nugget. Way too good to be so short. Bonus kudos for the sneaky Beach Boys refrain. (oh yeah...she dies in a car wreck.)


Katie was a kid,
I guess she hid her thoughts from everyone.
Went to school at eight, she was never late
That girl didn't know the meaning of fun.
Every night Katie prayed to God above
But her daddy gave her everything but love.
She woke up one day, said: "I'm on my way"
Her mummy read the letter, It did say:
"I'm on my way, I'm on my way."

They rode around and every boy in town
tried to win her back.
But it was no go, cause she rode with Joe
he was the leader of the pack.
People ran for cover when they rolled to town.
Stand in the way and baby you were run down.
Every night at the light
You can always bet they'd be in a fight.
There's gonna be a fight.

The night was black, rain on the ground
People on the street they could hear the sound.
A local road; engines so loud
There must've been a hundred in the crowd.
Katie and Joe, they were riding too fast.
She knew the ride would be her last.
Engines scream, you could hear her shout...
"Look Out!...Look Out!...Look Out!"