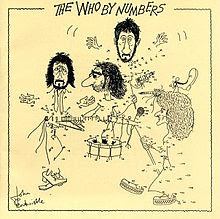 Excessive drinking and partying was the flavor of the day...nearly killing Pete and certainly playing a significant role in Keith's destruction. Friction between Pete and Roger had reached a physical point. And John E. was spending money faster than he made it.

Plus the silly cheese hit..."Squeeze Box"...given to radio from "The Who By Numbers" gave fans little warning of the more introspective and often darker songs found on the album. (It was jarringly NOT the party album buyers were expecting and it unfairly got a bad taint.) 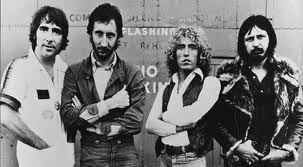 But this is inspired Who.  This is Pete struggling to draw a line in "real-life" sand...with the other bandmates bringing the right weapons to the fight.
This one's for the guy sitting in the back row.

Lost Gem:--> "Blue Red and Grey" ...is a surprisingly sweet & gentle acoustic tune dropped on the album...guided by Pete's uke and John E's nicely added horn. It's miles removed from the familiar bombastic thunderdome Who sound...charming and just a wee-bit wistful. Absolutely one of Pete's best.


Some people seem so obsessed with the morning
Get up early just to watch the sunrise.
Some people like it more when there's fire in the sky
Worship the sun when it's high.
Some people go for those sultry evenings
Sipping cocktails in the blue, red and grey.
But I like every minute of the day.

I like every second, so long as you are on my mind.
Every moment has its special charm.
It's all right when you're around, rain or shine.

I know a crowd who only live after midnight
Their faces always seem so pale.
And then there's friends of mine who must have sunlight
They say a suntan never fails.
I know a man who works the night shift
He's lucky to get a job and some pay.
And I like every minute of the day

I dig every second.
I can laugh in the snow and rain.
I get a buzz from being cold and wet.
The pleasure seems to balance out the pain.

And so you see that I'm completely crazy
I even shun the south of France.
The people on the hill, they say I'm lazy
But when they sleep, I sing and dance.
Some people have to have the sultry evenings
Cocktails in the blue, red and grey.
But I like every minute of the day