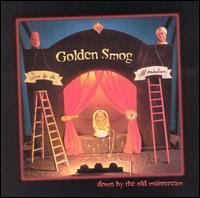 "When I was down she was full of advice."
~ Golden Smog ~


Golden Smog was for all intents and purposes a side-project providing another outlet for several creative musicians already in established bands.

On "Down By The Old Mainstream" (1995)...the participants were...Dan Murphy of Soul Asylum.....Jeff Tweedy of Wilco.....Gary Louris & Marc Perlman of The Jayhawks.....Noah Levy of Honeydogs.....Kraig Johnson of Run Westy Run.

Labeled an alternative country-rock band, Golden Smog was classic-relaxed kool and it shows up in every song.

The music was loosey-goosey...(but not sloppy)...and free from any real management expectations. This was regular guys (minus ego) having fun and making good music.

Lost Gem:--> "V"...sounds fresh...yet so familiar.  Easy to warm up to. Simply a bandmate's remembrance of a nice barmaid from the past. Rocks sweet!