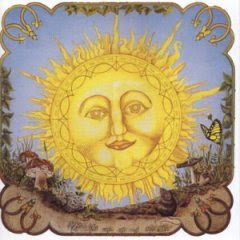 "New York City and the morning sun...
were awoken by the strangest sound.
Reportedly as far as Washington...
the tremors shook the earth
as Alfie blew underground."
Klaatu

From what I gathered talking to a few rock fans who were on-board with The Beatles from the time of "Sgt. Pepper"...some conspiracy theorists concluded that Klaatu...was really The Beatles. So as...to allow the "Mates from Liverpool" a chance to record together again...without the pressure of living up to their previous work!?!

And...from a few songs on this album...I can see how a Beatles connection might be made. This...and the aching hope all Beatles fans had that...John. Paul. George. Ringo... might truly try to pull a fast one and get back together for...one...last...time. 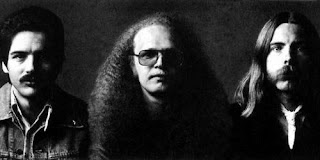 Klaatu
When the proverbial cat was let out of the bag...it was revealed Klaatu was simply a three member band from Canada who recorded a popish, lovingly quirky, and slightly Beatlesque album. And "moptop" fans everywhere turned their backs on Klaatu faster than Obama giving the cold shoulder to Rev. Wright.

However..."Klaatu" (1976)...when one forgets all the "rumor baggage" surrounding it...stands up as a pretty darn good record. Beatles be damned!

Track 4 is the McCartneyish sounding..."Sub-Rosa Subway". A good tune with just the kind of mystery voices and noises and occasional trumpets that certainly helped move the conspiracy rumor along. Add some great bass work and harmony and you have a satisfying song
.
But, for a few songs that might remind listeners of another well-known band (cough, cough) ...Klaatu offers up their own brand of popcorn.

Mostly...Klaatu is a CD filled with quirky, catchy melodies and, at the very least, will entertain even the most jaded listener. A neat addition to your music collection.
Good Stuff!

I was in college when the rumor hit, and it was sliced and diced every which way, holding our attention probably more than any bit of musical silliness had since 1969, when we were debating whether Paul was dead. Klaatu was pretty good, but, just as the San Francisco Giants fans have disappointed for years by every young player who turns out not to be Willie Mays, so were we fans disappointed because Klaatu wasn't the Beatles. Unfair to the band? Oh, yeah. Those guys deserved better.

I guess when your hoping for one thing...and finding out, sadly, you have something different...well, I guess it's pretty easy to see how anything less would never come close to measuring up.

And isn't it sad...the dream of the Beatles burying the hatchet and teaming up again can never happen.

Klaatu never had a chance.

I have always been a Klaatu fan. Their music stands up on its own really well. The members were really talented and still are. They are recording solo and are planning another Klaatu album according the Klaatu website. I really liked their "Hope" album. Also, the covers always had a little mouse somewhere on it and on 2 albums one ended with a mouse squeak and the next album started with a mouse squeak.

boodrow...I'm off to look at their albums again...Mouse check don't ya know!

Hi there,
why damn the Beatles? After all, the Fabs didn't start or spread the rumour. It was them radio stations. And Capitol. Anyway: They made 5 albums and each one is definitely worth its money. Just as much as any Rutles-stuff.
Greetz from Hamburg, Germany,
Frank

Frank,
I definitely will have to check out Klaatu's other CDs.
BTW...very nice Beatles blog you have.
Luv those guys!
Good stuff!