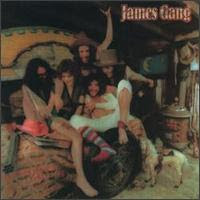 "Alexis you always used to talk about
leavin' your home town.
Headin' on South...
maybe down to New Orleans.
And you wanted me to help you out.
But you were just a young girl...
and I was just a hobo that had my doubts."
James Gang


Straight up...this is not the James Gang you think you know. Joe Walsh is gone. Tommy Bolin has arrived. And it is an altogether different band. A different "sounding" band. But that's not a bad thing.

With Bolin's arrival on "Bang" (hand picked by Walsh)...came a much needed creativity and energy boost. And the rest of the band mates seemed to have recharged themselves as well.

"Bang" rings the speakers with several rockers...all with interesting riffs with a few Bolin burners. (Although Bolin seems more subdued than he would on his solo efforts.) Still, TB works his strings with entertaining magic and leaves listeners wanting more.

Track 4 has Bolin and the Gang delivering a gentle ballad..."Alexis"...and is one of his best. Creating a jazzical groove and sounding first class...Bolin builds to a nice splintering of guitar wood.

"Bang" should be making classic radio rotation everywhere...with 9 strong songs that deserved much better than its initial sharting.

Maybe the departure of Walsh had fans jumping ship...or the annoying album cover. (After all, it was going to be called "Gang Bang") Those fans who weathered the storm were treated with a classic rock album that stands the test of time.
No weak tracks.
Good stuff!