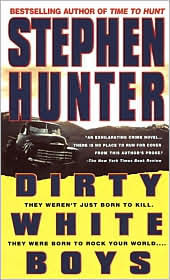 "The machine gun two step,
the .38 caliber rag.
The blackjack fox-trot are my favorite bag.
Razor wits and late night hits
are my claim to fame.
I'm the deadly dancer...
Legs Diamond is my name."
Legs Diamond

"Dirty White Boys" by Stephen Hunter is a fiercely violent and often extremely graphic crime thriller revolving around one of the more interesting psychotic criminals to date.

Meet Lamar. A prison-wise and street-wise convict who...along with a couple of other jailbirds...leads an escape from an Oklahoma prison.

On their bloody trek through the state...they encounter a seasoned State Trooper...Bud Pewtie...who makes it a point to attempt to bring these rancid rascals in...thus causing paths to cross at sometimes inopportune times. Nice!

Author Stephen Hunter is dead-on creating realistic and verbally nasty interactions between Lamar and whomever he encounters. And without being obviously gratuitous.

Also, giving Lamar no moral compass makes this character all the more frightening. We know guys like this walk the streets and we hope to never bump in to them.

I look forward to reading other books from Stephen Hunter.

With a stronger push...Legs Diamond might have become a household name. Their 1977 self-titled debut was primo. Not a weak track to be found.

If you can imagine Deep Purple & Boston in your Reese's Cup...then you have an idea of what a well-produced and rockin' CD this is.

Timing is everything, some say...and with New Wave taking the states by overwhelming storm around this same period...Legs Diamond must of looked like a RnR dinosaur. Too bad.

This is good stuff! (available as import only at this time). Visit your favorite CD trade shop. 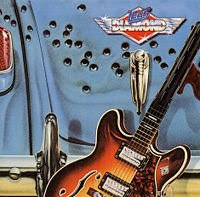