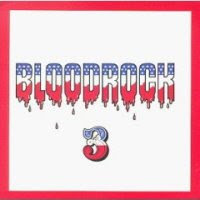 
Bloodrock was a 6 member band out of Texas that tried to carry the flag of "heavy metal" during the early 1970s. The group was similar to Grand Funk Railroad but with the added niche of occasionally creating songs that were filled with a more darker atmospheric sound...ala Steppenwolf.

In fact, each Bloodrock album had at least one song that was at home with the darkness...most notably "D.O.A." from Bloodrock 2 (1970)...famous for wailing ambulance sirens and beautifully creepy organ chords that accompanied the 1st person story of a victim dying from a plane crash.

Bloodrock 3, however, is the stronger record. Filled with more memorable songs and solid riffs, along with vocals (Jim Rutledge) that easily rivals Mark Farners'(Grand Funk).

The only Bloodrock performance I could find.
"Lucky In The Morning" from Bloodrock 2.

Track 4 is "You Gotta Roll"...an energetic tune with a slight southern rock feel that would not have been out of place on a Molly Hatchet record. The song also displays some tasty guitar work from Lee Pickens. Nice!

I'm not going to sit here and try to convince you this is a must own CD for your collection. However,if the macabre classic..."D.O.A"...is all you know of Bloodrock...well...it's not truly a fair representation of the band's music.

Pick up Bloodrock 3 and you might discover a CD that "out-Grand Funk's the Railroad".
Good stuff. 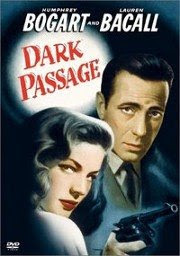 "Everybody wants to be recognized.
Doesn't matter what you've done.
Some people find it on a big silver screen;
Some find it behind a shotgun.
A small young girl downtown south...
She saw a starlet in a movie house.
She left her momma to stake her big claim.
Poor little girl never gonna be the same."
Detective

I guess you could say I've been binging at the Bogie Buffet...tasting one classic after another. All four are just a few considered must-sees...and I'm glad I finally got around to introducing my DVD player to them. But the Humphrey Bogart movie that pleasantly caught me off-guard is the often forgotten “Dark Passage” (1947).

There aren't too many directors who would risk keeping the main character's face hidden for nearly half the film...but Delmer Daves pulls it off...shooting from a first person (Bogie) perspective. And it totally works.

Many of Bogart's strongest characters are sympathetic ones...and this one is no exception.

Just as we sympathize with Bogie's Rick Blaine in “Casablanca”, and his Sam Spade in “The Maltese Falcon”....the unmistakable “bad hand dealt from life” that his “Dark Passage” character is stuck with...easily has us pulling for him.

In “Dark Passage”...Vincent Parry (Humphrey Bogart) is an innocent man who escapes from prison...going on the lam in hopes of proving his innocence. 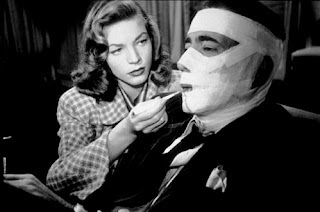 Lauren Bacall & Humphrey Bogart
On his search he meets Irene Jansen (Lauren Bacall) looking like a ripe tomato on a freshly made salad. And Madge Rapf (Agnes Moorehead) looking like (in this instance) a stale crouton.

The film is nicely film-noirish with many great shots of San Francisco.
Some of the camera shots chosen by Daves has a Hitchcock-esque style that will keep viewers easily entertained.

The prison escape is a classic to watch...and though this movie is filled with extreme coincidences that stretch our belief at times...because of our love for the "Bogie Man”...we can let some of the happenstance slide.

Must See Moment:
The first 15 minute escape scene is not to be missed.
Also watch for a sweet camera shot of a person falling from a ten story window.
Good stuff!

The band...Detective...was filled with a hodge-podge of previous rock musicians...led by guitarist Michael Monarch (formerly of Steppenwolf) and lead vocalist Michael Des Barres (formerly of Silverhead/Power Station). Their debut album was produced by Jimmy Page and is a lost classic filled with great rock'n'roll.

The album unfairly tanked initially...but the nine tracks sound jamming fresh today floating out of my speakers. With vocals cheek kissing Robert Plants' and a churning undertow like Bad Company...a person could do a lot worse.
Good stuff! 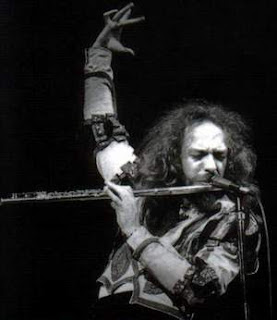 "All should be warned about this
high born Hunting Girl.
She took this simple man's downfall in hand;
I raised the flag that she unfurled."
Jethro Tull


Here are a few music lover sites I enjoy and frequent regularly...and encourage you to check'em out.

The Daily Vault is a great site for CD reviews. Most are extremely well written with specific songs they like/dislike and other great observations that make for good reading. The site is extremely easy to navigate and well-worth investigating.

Setting The Woods On Fire is a nice blog with a slant toward country 'though certainly not restricted to that theme. It's always a pleasant surprise to see what music is flying his kite from post to post. Good stuff!

There Stands The Glass is a wonderfully eclectic blog that hovers around jazz and blues...but offers up terrific finds from all genres. Old and new. I've received quite a musical education Nice!

AND ANOTHER THING:
A great little show to check out on cable (MOJO HD) is..."Three Sheets". It's a 1/2 hour show about beer and liquor and the variety of drinks from around the world and is surprisingly a blast to watch. Not only a great way to improve your geography...but the show has wonderful shots of out-of-the-way bars and the people that frequent them.

A minute example of "Three Sheets".
The many varied alcoholic drinks is an education as well and the host (Zane Lamprey)...is extremely pleasant...(with an iron stomach I might add). "Three Sheets" is a fascinating trip...regardless of your personal alcoholic consumption. I DVR it. Good stuff.

AND ANOTHER THING:
If looking for that rare album that entertains from start to finish...Jethro Tull's..."Songs From The Woods" (1977)...easily fits that bill.

Rocking one minute...tripping off into Medieval Land the next, Jethro Tull makes it all make sense. "SFTW" is timeless and smart without sounding artsy-fartsy like some other bands that might be crossing your mind right now. 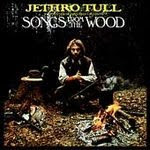 Every track smacks of genius...and though "SFTW" will not be everyone's cup-o-tea... those who love the spirit of rock creativity will find this classic gem fills a much needed niche.

So...if you're planning on traveling down the Prog-Rock highway...don't forget to pay the..."Tull". Good stuff.

Introduction:-->Graham Parker and Some Lost Diamonds 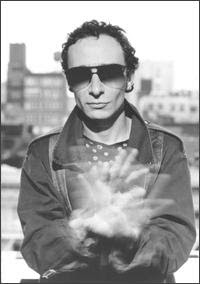 "I remember rainy nights I thought I'd drown.
Was it London, New York, Paris or Amsterdam?
I forget the details now, I must admit.
But you were there through all of it.
And it shook me, and I'm still shaking now."
Graham Parker


Although never quite reaching the same commercial level of success as some of his peers...Graham Parker has been writing and performing incredible songs for over 30 years.

Often compared to Elvis Costello (who I like as well)...I find Graham Parker's songwriting and his "on the sleeve" vocals much more varied and interesting. In fact, in making my top 50 living songwriters list...I have Parker easily making the cut. (an artist Paste magazine ignored on their list..oops!).

Parker's clever turn of a phrase and honest observations will make any "wordsmiths of song" smile in understanding. Sadly, hearing any songs from this legitimate RnR HOF candidate on the radio is nye on impossible.

This underrated singer/songwriter has recorded 23 studio albums and several live offerings...and simply has been too good/too long to go on being ignored.

For those in the dark...here is my list of twelve great Graham Parker songs to seek out and add to your ever expanding musical crayon box.
Check It Out.

Definitely check these gems out. You'll be pleasantly surprised if you've never listened to GP.
And I'm only scraping the edges. If I missed one of your favorites let me know.
Good stuff!