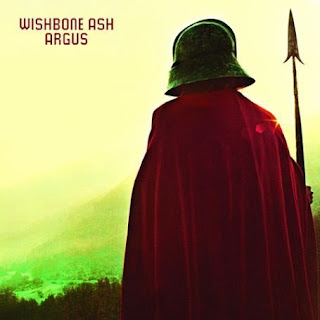 
The album..."Argus" (Wishbone Ash) was heard often around the house while I was growing up.

I enjoyed listening to the majestic aura each song projected while thinking about the fascinating cover. And though never admitted as a concept album..."Argus" always sounded like more than just random songs released to the public.

Perhaps...a life-long warrior's conflict between his love for the battle and his struggle to find peace. Concept or not, Wishbone Ash delivered an often forgotten classic.

Track 4 on this gem is "The King Will Come"...a 7 minute blend of double-lead guitar spinning trips and runs to delight the listener.

This double-lead guitar attack was a successful trademark of Wishbone Ash.

Andy Powell and Ted Turner seem to communicate on a whole other level...ad libbing, as often as not. And with each uncannily anticipating each other's string bites. Awesome!

Martin Turner on bass...lays a creative undertow on every song and sings or shares vocals on every number.

Tasty drums are provided by Steve Upton and he has a sweet way of drawing attention to the skins at just the right moments.
You'll understand after listening to this lost classic.

Finally, this band has one of the greatest names of all time. And...one of my favorite album covers...perfect for framing. Good stuff!

Wishbone Ash performing another great song
from Argus..."Throw Down The Sword".

You're right about the college crowd. We dig you. We are WE’RE LATE FOR CLASS, an independent college improv band that gives away our music. We’ve just released our 20th post, A Collection, and it features our best work from the last year.

We’re writing you in hopes that you might post our new album on your fine blog. It would mean a lot to us to reach your wider audience... and to just be acknowledged by other bloggers like yourself would be a treat. Here’s a link to get all of the codes for the cool animated cover and full album MP3 player, should you like to post them for your readers...

And you can see how all this looks on our own blog...
http://werelateforclass.blogspot.com/

Of course... there’s nothing in this for you, except a “thanks.” We will, of course, be thrilled to include you in our blog’s link list, “Bloggers Kind Enough To Promote Us Even Though There's Zilch In It For Them.” And, we’ll even love you for it, too. Even if you don’t want to make the space, a link would be most welcomed (and drop us a comment so we can reciprocate). Should you need anything else, just let us know.

We’re Late For Class is all improv and pro-herb, so an altered state of mind is highly recommend for optimum listening pleasure. You never know... you might even like us. We can be reached at werelateforclass@hotmail.com. Please feel free to tell us what you think. We’ve got thick skins and would love the feedback. Above all, thanks for taking the time to read and consider us. PLEASE FEEL FREE TO DELETE ALL THIS CRAP FROM YOUR COMMENTS!
All the best...
WLFC