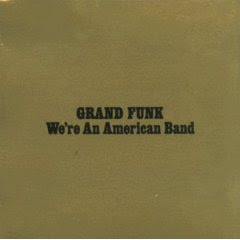 "Watch out, whats that noise...
there's somebody at the door.
It must be black licorice...
she come back to make me cry some more."
Grand Funk

"We're An American Band" was Grand Funk's seventh studio album...and it certainly turned out to be their lucky number.

The band dropped "Railroad" from their name. They brought on-board a terrific keyboardist into their fold (Craig Frost). And they handed over production duties to an already recognized studio wizard...Todd Rundgren.

Stir all these variables together and you have a band loaded for bear...with the attitude and energy to bring one back.

Track 4 - "Black Licorice" is a rockin' number that was absolutely meant to be played loud. A forgotten highway song if ever there was one.

The trade off between Mark Farner's guitar spanking...and new member, Craig Frost barely hanging on to his keyboard is classic. And it creates a powerful driving force.

More guitar work from Farner would have been choice...however...Frost working his keyboard like a man possessed by a..."Reefer Madness" piano-playing stunt double....more than makes up the difference.

Vocals, usually handled by Farner...were handed over to drummer...Don Brewer on this number...and he earns his allowance by providing the listener with some delicious...manic screams...to beat the devil. Whoa!

Mel Schacher rounds out the sound with his creative bass playing.