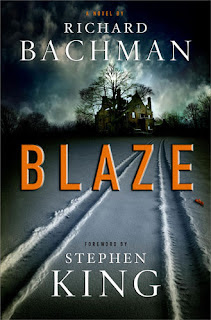 "She cast her spell all over me...
and had this poor boy screaming...
Is it real...or fantasy?"
Billy Thorpe

NO SPOILERS:
The wordmeister ...Stephen King has always delivered us pretty good stories. And over the length of his career...(with the exception of a couple of clunkers)...his books weigh heavily on the "good stuff" side.

Let's be upfront from the get-go..."Blaze" is Good King. The story grabs you from the beginning...and you will not want to put it down.

This gritty crime tale revolves around Blaze (aka Clayton Blaisdell, Jr.). Blaze is big and strong...sweet, actually...but very simple-minded. He's hooked up with this friend, George...who together...work different towns pulling small-potato crimes that are obviously lame. However Blaze looks up to George like he's Al Capone.

In a series of well-told flashbacks...we learn how life was for Blaze growing up and we find ourselves sympathetic to the big hoss. And even though Blaze is walking on the wrong side of the law...we hope he at least breaks even...without causing too much damage to himself...or others he may encounter.

It is in these flashbacks that King brings to light the social damage many children encounter when faced with parental and adult violence. Becoming fenced in a circle of which there is no gate for escape.

Character development has always been King's bread-and-butter. First, make the reader understand them...and then throw different circumstances in their direction to help carry the story along. King has that formula clicking on all cylinders in this gem.

Richard Bachman...as is widely known...was the pseudonym Stephen King used while writing stories in the late 1960's and early `70's. And, except for a little present day doctoring, "Blaze" was written in 1973.

And it is important to remember that King was still virtually a nobody...typing in small quarters without the enticement of movie offers dangling in his face. This was virgin Stephen King. And it is good stuff!

For a bonus track...at the conclusion of "Blaze"...is a short story called "Memory" which Stephen King uses as a springboard for his next novel, "Duma Key". Can't wait.

Billy Thorpe's..."Children Of The Sun" had one of those killer title tracks...with the rest of the songs almost as deadly. Spacey sounds with trippy vocals. Good stuff. 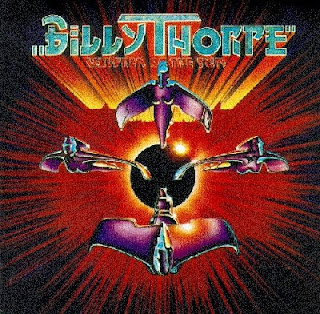