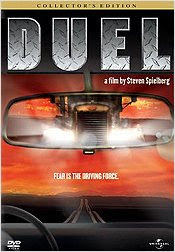 "A moon shining through a screen.
Living on the edge it seems.
You gave a kiss to me,
Proving how good we'd be.
Baby, you treat me like an enemy."
Moon Martin


NO SPOILERS:
"Duel" is a thrilling TV movie directed by a young and talented Steven Spielberg...and has since become somewhat of a cult favorite.

Newly released as a Collector's Edition DVD...I was surprised to learn that Richard Matheson ("I Am Legend" fame) wrote both the story and the screenplay.

One of the added bonus features has Richard Matheson explaining how he based "Duel" on a true experience while traveling with a friend. He, also discusses the development of the story...as well as his writing methodology. Very interesting!

"Duel" revolves around an average soft-spoken kind of guy...David Mann (Dennis Weaver)...traveling alone in his car...on one of his routine all-day sales trips.

On this trip, however, Weaver encounters a huge big-rig...driven by a psychotic driver... who decides to f**k with him in a cat-n-mouse kind of game on the highway...that soon becomes a game of life-or-death. 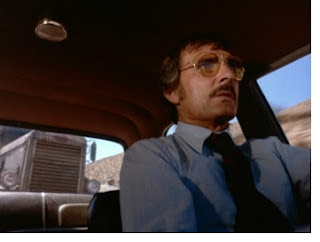 Dennis Weaver with BigRig close behind
Dennis Weaver is perfectly cast in this unforgettable picture...and should have garnered a few awards for his ability to take the viewer through a gamut of emotions that ring...dead-on true.

Also, Steven Spielberg masterfully allows us (the viewer) to become an invisible passenger with Weaver...as we hear his every thoughts and words as he tries to come to grips with what is happening to him on his usually uneventful road trip.

So in tune are we...to his emotions and the events surrounding him...that we can't help laughing nervously as Weaver basks in exhilaration when he successfully pulls a maneuver in his car that takes him out of harms way...while we (the viewer) are glad for him...we are not so quick to believe he's "out of the woods" yet.

Spielberg wisely chose to use ...NO...music...opting for well-placed sound effects throughout the film...creating a clasutrophobia within Weaver's car. 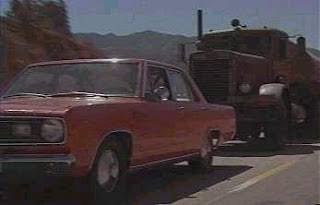 But I could easily imagine the soundtrack from "Jaws"...(which Spielberg would direct four years later)... ...working perfectly with this film...with the Big-Rig...substituting for the Shark.

Must See Moment:
Watch Dennis Weaver at a Truckstop Restaurant as his paranoia soon snowballs out of control.
Look for the 'Snake Lady' (Lucille Benson) and her exhibits. She's had a million small parts in TV and Movies. You'll recognize her... and her very distinctive voice.


Baby, you ain't a man
'Cause my heart's in your hand
Any fool can see
I love my misery
Bad news
It's born in my blood
Bad news

Mamma, tell me what is wrong
Every time I sing a song
You know I find you on my mind
Bad news

Whispers of what you've done
Crazy I bought a gun
My fingers to your window
Whiskey's on my clothes.

Man, I really like this movie... It's no Vanishing Point, that's for shure, but, for me, it's in the same league... this is Spielberg's at his most creative (at least until that kinda fake "end", but even that is debatable), paranoid and "incorrect" frame of mind... this DVD version is good, with various comments, interviews and insights about the making of the movie. Good image and sound, too. I just wish the spaggheti westerns I love so much had the same treatment by the majors, but that's not the issue here. A '70s must.