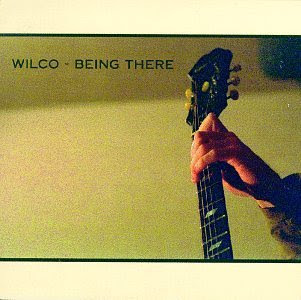 "Displayers of affection and all good intentions, why don't you just send me the bill.
Don't forget the flowers someday, I know you will."
Wilco

One of the record business traditions that has long been a thorn in my thumb is the obligatory double album. More often than not...the double album turns out to be a bad case of creativity-diarrhea.

This kind of self-indulgence usually leaves me feeling like I've been hosed. Hosed, and scratching my head wondering why the artist didn’t pick the best cherry songs, release a regular CD…and leave the obvious filler cuts on the floor.

Having been double-album burned on more than a few occasions...I approach these releases with less than average enthusiam.

However...once-in-a-while a double-disc is released by an artist...and it really works.
"Being There" by Wilco fits the bill and is a tour-de-force of musical pleasure.

Loaded with a collage of 19 eclectic songs written by Wilco founding member, Jeff Tweedy...we are quickly put on notice from the opening track.

As a cluster-flock of drum beats and psychedelic noises build to a breaking point..., Tweedy tells us...“You think you might just crawl back in bed. The fortune inside your head. So misunderstood. So misunderstood. I’d like to thank you all for nothing at all”. (“Misunderstood”).

From the psychedelic crunch of the opening track, Wilco easily slides into a beautiful country hum. “By the bed, by the light that you read by. By the time that I get home to say good night, I need to see you again”. (“Far, Far Away”).

A classic rock song, “Monday”, would not have been out of place on an early Stones album. And “Dreamer In My Dreams” sounds like a left over track from The Faces right down to their trademark false endings. Very nice.

“I keep on singing, you're eyes they just roll. It sounds like someone else's song from a long time ago”. (“Someone Else’s Song”) is about a singer frustrated in sounding like everybody else. The song does sound familiar and is a classic. “Hotel Arizona” is covered in feedback as Tweedy explains the day in the life of a rock star. 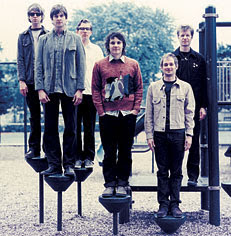 Wilco
Throughout the two discs, Wilco/Tweedy gives the listener a Rock-n-Roll Life 101.

An invisible cloud of loneliness permeates every song. “When you perform it's so intense. When the critics pan I write in your defense. I understand I'm just a fan, I'm just a fan". (“The Lonely One”) Tweedy reminds us that no one has dibs on loneliness. Good stuff.

Wilco can make you hurt and rock you into forgetting your problems with equal aplomb. Not an easy task for any band. That Wilco can jump from one musical genre to another and not sound bogus is even more venerable.

“Being There” has no wasted filler and was released by Reprise in the pleasing cardboard style. It can also be purchased for less than a single CD which is a big plus.

Wilco is an awesome band.