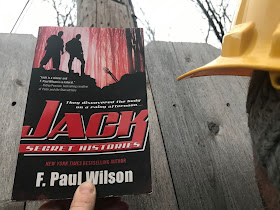 NO SPOILERS:
This is a fun, quick read that provides some back story for the wonderful grown-up “Repairman Jack” series created by the same imaginative author...F. Paul Wilson.  Here, a young Jack along with his two best friends discover a strange object in the New Jersey woods that beg explanation.  Of course, curiosity leads to other more dangerous things as one might expect.  “...Secret Histories” has a very Hardy Boys flavor, but with a more creepy, unearthly tone.  And even the author enjoys poking fun at himself acknowledging the Hardy influence.  "Repairman Jack" fans will especially gobble this up, but it's not necessary to be on board that train to find pleasure on this journey.  It all adds up to an enjoyable adventure that stands alone but still waves a flag for dangers yet to come.