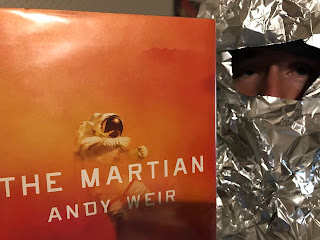 NO SPOILERS:
I knew I would get around to reading this book eventually,  so I've avoided the movie and trailers as best I could.  (I love movies, but hey, I'm a book man. 'Whadyagonnado?')

Anyway, about "The Martian."  Come to find out, maybe a Bunsen burner chemistry class or two...or three might pay off in spades.  Add a solid math background to help work the numbers out and a talent for “thinking outside the box" and you just might get back to Earth in time to watch the next season of "Game of Thrones."

Now let's be honest.  With all of the above in your wheelhouse and an unlimited supply of Ramen Noodle Soup, you'd still find yourself doing a whole lot of finger-crossing.  And we're right there with him the whole time.  Astronaut Mark Watney.

When a mission goes unexpectedly bad for the Mars expedition team, Watney finds himself alone, mistakenly left behind for dead.  To survive, he must figure out a way to keep himself alive for as long as it might take for a rescue team to make a return trip to get him.  Here's the real drain-suck.  They don't know he's alive.

Andy Weir has chosen to let his protagonist narrate the story in a journal-like style allowing the reader to really get inside his head.  The way his mind works. The way his emotions roller-coaster.  His daily and weekly rehash of plans and complaints and snafus and sense of humor.  And we quickly learn that our boy..."is wicked smart."
But not in that pissy, obnoxious way.

Had the author gone that direction, I would've bailed 50 pages in.  No, our lone survivor is, more or less, just a regular guy who'd probably owe somebody $20 bucks on the Chiefs/Steelers game...but you know he's good for it.  That and he just happens to be a freakin' astronaut.

"The Martian" is a very enjoyable and unique read. Even the pieces of technical mumbo-jumbo begin to make sense. (And there is a little bit, but not in that shitty acronym-crazy Tom Clancy way.  So have no fear.)  This novel is doable.  By the way, you'll probably think about this book the next time you order a baked potato. 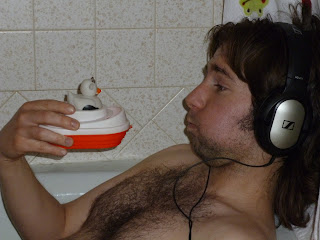 "Evil Roy Slade" (1972)...is a made-for-television comedy Western filled with silly one-liners and sight gags that predates "Blazing Saddles" by two years. And though not nearly as good, "Evil Roy Slade" has still become somewhat of a campy cult classic.

John Astin plays the main character, Slade..."Sneaking, Lying, Arrogant, Dirty and Evil"...abandoned at birth and raised by vultures. And he valiantly tries to change his “evil” ways when he falls for a pretty customer while robbing a bank.

Evil Roy mugs the camera more than Gomez from "The Addams Family." But that's okay.  There are plenty of other comedy actors cracking-wise and mostly giving Astin a good run for his mugging money.  There is also a young Larry Hankin as one of Slade's henchmen who simply makes every scene better just being in it.  (See Larry Hankin interview)

For rock fans, the birth of what would later become the classic Loggins & Messina's, “Angry Eyes” can be heard around the 10-minute mark. Jim Messina was asked to contribute a short guitar lick in a scene that hinted at trouble ahead.  It's definitely brief, but I love learning RnR history minutiae like this.  Cool as fark!  (See Jim Messina interview) 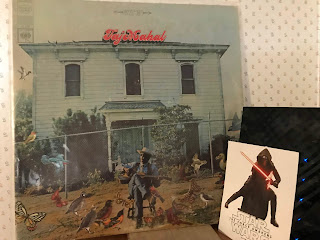 Let's face it.  Performing on the infamous "Rolling Stones Rock and Roll Circus" (1968) didn't hurt none.  And brought some fiery "oomph" to plenty of new ears once the show was finally released.  That's where I first got on the train.

So when I finally stumbled upon Taj Mahal's self-titled debut album earlier this spring, I was reminded of that show and threw down my money.

I'm well aware expectations can throw a listener a nasty curve sometimes, but that was not the case here. Taj Mahal hit that comfortable sweet spot and has become one of my go-to albums when I need a blues-rock fix. 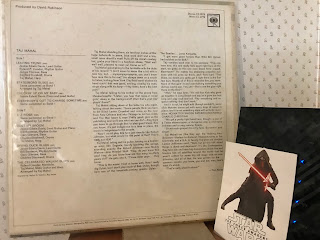 Taj sings with joy while working the harp and making his guitar slide on ice. And I'm becoming a bigger fan of Jessie Edwin Davis all the time. He provides lead guitar work. Ry Cooder is everywhere and that's always a good thing. This album feels like they took their shoes off.  Very, very comfortable. Glad I jumped. 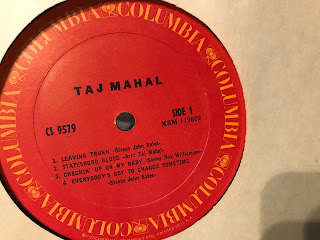 
(btw...my copy is the one that has colorful birds and butterflies scattered about.  I believe original copies have Taj in the front yard jammin' all by his lonesome.)