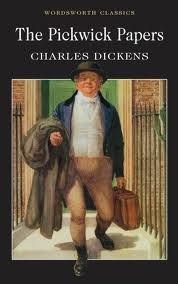 Take a two week trip and you feel like you've done something.  Samuel Pickwick and his wealthy cronies decide to skedaddle outta the city for a two year romp exploring the English countryside.

Now that's what you call a vacaysh!

Charles Dickens' first novel finds him weaving a humorous tale of misunderstandings and happenstances that follow likable Pickwick and his goodnik buddies wherever they travel.  In the process, Dickens brings to the forefront many social issues that would be more famously explored in his later novels.

At over 800 pgs, "The Pickwick Papers" (1836) is not for the faint of heart.  Dickens occasionally stretches sentences like he's pulling apart a Slinky.  And the slangular dialect of the period can take a bit of warming up to.

But once you catch on to the rhythm of the word-flow...(and you will)...it's a pretty dang entertaining read.  Step inside this noisy coach and enjoy the journey.

I got a letter from a friend the other morning
He say it's hot down in Montego Bay
I got the point and now I think it's finally dawning
Yeah, yeah, I got to get away.

I got to take myself a permanent vacation
The sky's the limit but my plane won't fly
My nose is clean and lordie don't need no sedation
Yeah, yeah, and that's the reason why.

I got a sister man she really got a pinhead
She think she kinky but she can't get straight
She say she livin' but I kinda think she brain dead
Just excess baggage on a late night freight.

I gotta take me on a permanent vacation
The girl's be cummin' down in Cayman Brack
I gotta hand it to a firm situation
Yeah, yeah, I got to cut me some slack. 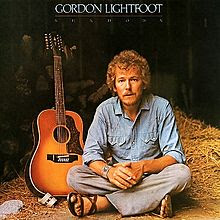 "Sights and sounds
of the people goin' 'round
Everybody's in step
with the season."
--> Gordon Lightfoot <--

When it comes to Gordon Lightfoot albums...I mostly cherry-pick the branches rather than take the whole tree. But what I've grabbed from this Canadian troubadour's catalog are absolutely killer and not to be missed.

Lightfoot has always reminded me of Jimmy Buffet...(without the tray of empty margarita glasses piling up around his table, of course.) That's not meant to be a bad thing...just that Gordie generally keeps it a wee-bit more serious.

His folk rock presence was most heavily felt in the 70's...thanks to his first and only #1 album in the States..."Sundown" (1974). Songs like "Carefree Highway" and the title track are daily radio staples and have remained timeless.

Lost Gem:--> "Circle Of Steel"......is a haunting portrait of a Xmas season for families of the welfare variety. And made all-the-more unforgettable by the beautifully played recorder (Jack Zaza)...that truthfully captures the harsh reality. Not your Griswold Family Christmas...no, not this time.

Rows of lights in a circle of steel
Where you place your bets on a great big wheel
High windows flickerin' down through the snow
A time you know
Sights and sounds of the people goin' 'round
Everybody's in step with the season.
A child is born to a welfare case
Where the rats run around like they own the place
The room is chilly, the building is old
That's how it goes
The doctor's found on his welfare round
And he comes and he leaves on the double.

Deck The Halls was the song they played
In the flat next door where they shout all day
She tips her gin bottle back till it's gone
The child is strong
A week, a day, they will take it away
For they know about all her bad habits.

Christmas dawns and the snow lets up
And the sun hits the handle of her heirloom cup
She hides her face in her hands for a while
Says look here child
Your father's pride was his means to provide
And he's servin' three years for that reason.