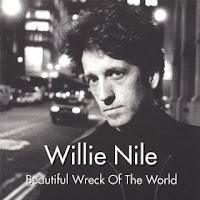 "You'll wipe off that graveyard grin


When Willie Nile hit the music scene, critics were penciling in his name atop the short, but seemingly endless, "The Next Dylan" list ad nauseum.

An Excalibur no one really wants and no one's ever owned.

Neverthless, Willie Nile has been court and sparks with most critics since releasing his self-titled debut in 1980.

He brings songs that play straight and unforced. Rocking with rumble one minute; Cool-burning the next. Like city bruises and small victories...Nile owns the words he sings. We feel it and own them as well.

Lost Gem:--> "The Black Parade"...is a deliciously spiteful reminder to whom it may concern..."What goes around, comes around."


Hand me down my walking cane.
Tune up my New Orleans drum.
They're gonna call my name when the morning comes.

Rags hanging off my bones.
Faint hearts will all run away.
No mercy will be shown on this judgment day.

You laugh at the shape I'm in.
Drink cheap wine and have all your fun.
But you'll wipe off that graveyard grin cause your time is gonna come.